Najla Ayubi on Elections and Women in Afghanistan

If Afghanistan is synonymous with a rugged terrain and warring tribes, the “graveyard of empires,” then it should also be synonymous with courage and defiance. Afghan women collectively deserve not only the Nobel Prize for peace, but also a prize for courage and valor, especially crafted for them. Women of very few countries have had to endure what Afghan women have endured.

The Taliban have become a metaphor for neo-barbarism and savagery. However, Afghan women have not just endured their reign of terror. They also have lived through foreign occupation, internecine rivalry, and the epicenter of jihad in its most vicious form. And now, with the upcoming runoff election on June 14, new worries arise as Afghan women face an election that will decide how their future will look under a new regime. 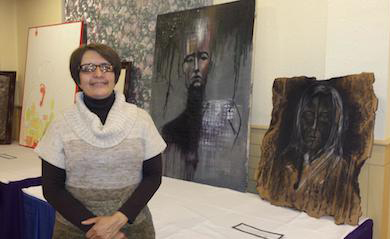 In the words of Seema Samara, chair of the Afghanistan Independent Human Rights Commission and former Minister of Women’s Affairs, “Afghanistan is the laboratory where every kind of weapon produced in the world has been tested.” But Afghan women have endured; and one of the finest representatives of this is Najla Ayubi – a former judge and now an untiring crusader for women’s rights. Ayubi has seen her father and brother assassinated by the Mujahideen; she was forced from public life into the four walls of her home by the Taliban; and then, once the Taliban were overthrown, she emerged to help in the reconstruction of her country and society. Today, Ayubi serves as The Asia Foundation’s deputy country representative in Afghanistan and is a member of several regional and international organizations advocating for women’s and human rights.

I spoke with Najla Ayubi recently. She was in India to attend a conference of the Women’s Regional Network about women’s rights and the situation in Afghanistan. She tells me “fear of voting in 2014 elections is high among women and men … but overall, people think that [this] election will bring positive changes in the life of the people.”

What are the main obstacles that Afghan women face?

There are major problems women face. In 2013, we have observed so much violence against women like killings, kidnaping, and domestic violence reported not only in the media but also by human rights commissions and NGOs.

Afghanistan has 1.5 million widows, one of the highest proportions in the world. Many men were killed in the armed conflicts, and older husbands are likely to die sooner than their child brides. The average age of an Afghan widow is 35, and 94 percent of them are illiterate.

According to the Afghanistan Independent Human Rights Commission, the number of cases of violence against women in 2013 has risen by 24.7 percent compared with last year. A 2013 survey by The Asia Foundation found lack of rights as the biggest problem women face in Afghanistan, followed by illiteracy and unemployment.

What about the women in politics today? Are they making a difference?

There are 25 percent women in the provincial councils and 27 percent in the Afghan Parliament. We have three women ministers; and nine members of the High Peace Council are women. Women constitute about 24 percent in the community development committees. There are a few women within each of these structures that are active and playing an effective role; but unfortunately most of these women don’t have gender mainstreaming plans to support women’s issues and interests.

However, I do see a change. For instance, during the Taliban rule women were forced to remain indoors, and were not able to walk freely, but now at least their presence in the political and public institutions make women visible. There are new young women emerging as leaders that can assess the performance of women in the current institutions and think strategically how to fill those gaps and perform well when they come into power.

As a judge, how do you find the new Afghan constitution? Has it made women’s rights better or worse?

The constitution guarantees the rights of women, but there is no political willingness in the justice and judiciary institutions to implement the law. The presence of the extremists in the public institutions and parliament makes it much harder to implement the laws. For example, the Elimination of the Violence Against Women Law was attacked by these extremists in the parliament and followed by some demonstrations in some parts of the country.

What makes it difficult is the patriarchal perspective toward women’s rights and the lack of rule of law because of the high level of the corruption in the public institutions.

Are women afraid of 2014 transition and a possible Taliban takeover?

Losing 5 percent of seats in provincial councils, the attack on the Elimination of Violence Against Women Law, the high level of violence against women in the past months reported by the media, and women losing their jobs and confidence to work outside their homes are the facts that can scare women from the 2014 transition. But, I would say that there are mixed feelings among women’s groups and human rights activists that in Afghanistan the people are not the same as they were in the 1990s and they will not allow anyone to disturb their daily life. But, there is also uncertainty about the involvement of the international community in the future and concern that President Karzai refused to sign the Bilateral Security Agreement with the United States.

I always argue that there are two fronts that Afghan women have to fight on – one is with conservatives and insurgents and another is with the conservatives that are already working from within the government system, and these are more dangerous than those attacking women directly. The ones who work in the government structure are more negative towards women’s issues and can change the policies to make them very unfriendly to women. Women’s participation in the peace talks and negotiation processes help ensure that redlines are not crossed and there is a smooth political transition of power through the elections.

Aditi Bhaduri is an award-winning independent journalist and researcher, who writes for both the Indian and international media. The views and opinions expressed here are those of the individual author and not those of The Asia Foundation.