In a dramatic challenge to the principles of democracy, on Friday night, the parliament of Timor-Leste decided in a closed session to fire all foreign judges and advisers in its justice system. The National Parliament passed Resolution No. 11/2014, calling on the government to audit the justice sector and immediately terminate all existing contracts of at least 11 international judges and prosecutors, as well as other international staff in the Courts, Public Prosecutor’s Office, Public Defender’s Office, Anti-Corruption Commission, and the Legal Training Center. In response, the government quickly passed Resolution No. 29/2014, an echo of Resolution No. 11. The stated legal basis for the resolutions was force majeure and “national interest” – but it’s unclear whether either is applicable in this case. 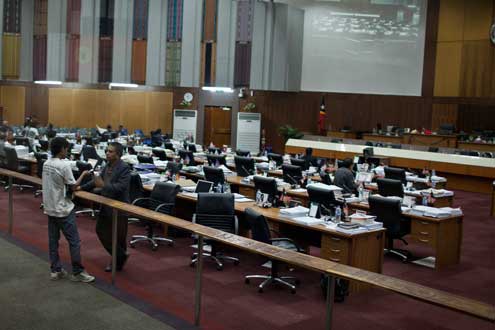 On Friday, Timor-Leste’s National Parliament passed a resolution to terminate all foreign judges and advisers in its justice system, opening a debate over the legality of the resolution and the future of Timor’s independent judiciary. Photo/Conor Ashleigh

While the legality of the resolution is being questioned by a range of political and judicial figures, the act of the resolutions from the parliament and the government clearly undermines the principles of an independent judiciary. There is deep speculation over the meaning of the resolution, but the response seems to be conflating a number of issues. On the one hand, some are interpreting this as an overreaction to the unfavorable outcomes in a number of pending cases between the government of Timor-Leste and the oil giant ConocoPhillips on matters pertaining to the taxation of oil revenues. Some say it is a case of “face saving,” given that much of the assessments of the outstanding taxes allegedly due to the government in the first place were in fact calculated by the government’s own (recently arrested) foreign advisor to the Ministry of Finance. Analysts point to Prime Minister Gusmão’s growing dissatisfaction toward the country’s public prosecutors and anti-corruption body (KAK) as a possible motive for the blunt move.

Compounding the mystery surrounding the developments, the Minister of Finance, Emilia Pires (a close ally of Prime Minister Gusmão), recently returned to Timor-Leste after spending months abroad, including missing the last two budget debates. Coincidentally, news recently surfaced that her immunity from prosecution for a corruption allegation would not be lifted anytime soon.

Certainly, no one would argue that the legal system had been functioning perfectly, and that having a large dependency on foreign judges, lawyers, and advisers to run the system was ideal. But initiating an impeachment of high court officials (foreign or otherwise) sends a clear message to all justice actors – particularly national judges. As such, despite a growing sentiment that other recent detentions of foreigners could signal a general dissatisfaction with expats, or malae, the main concern should be about the legality and not the nationality involved in the matter.

The legal basis for this decision is shaky at best, and likely unconstitutional. The Constitution of the Democratic Republic of Timor-Leste protects the principle of separation of powers (Article 69), guarantees the independence of the courts (Article 119), and ensures tenure to judges (Article 121.3). In other words, neither the parliament nor the government can legally fire these judges – the power lies only with the Superior Council of the Magistracy. For those affected who are not judges, prosecutors, or public defenders, depending on the types of contracts, other applicable legislation including the Labor Code and contract law would still apply, neither of which were invoked.

The government has not made a valid case for “national interest,” nor for a force majeure, which is generally utilized for unforeseen circumstances such as war, riot, natural disaster, strike, or so-called “acts of God.” Civil society have come out strong against the apparent interference with the justice sector. Notably, the justice monitoring civil society organization, JSMP, held a press conference “urging the national parliament and government to reconsider these resolutions and immediately take appropriate actions to guarantee the independence of the judiciary.”  Leading human rights activist, Jose Luis de Oliveira, in turn wrote this article in which he questions both legal justifications cited by the resolutions (force majeure and national interest) and alleges that the secret plenary was in fact the second meeting, that it was preceded by a private meeting attended by some parliamentarians at the prime minister’s residence.

So far, what is known is that only a handful out of the 25 MPs of the opposition party, Freitilin, voted in favor of the resolution, and the others that didn’t vote for it have spoken out publicly on the appearance of “interference with the justice system.” According to local civil society organizations familiar with the events, the chief justice of the Dili District Court has publicly stated that the resolution is not legal, and the president of the Court of Appeal has said the resolution has no legal standing.

Beyond the immediate administrative impact that removing 11 international judges and prosecutors and delaying formal training of new Timorese magistrates could have on a notoriously backlogged legal system, there are also more far-reaching implications for Timor-Leste. One is the implied threat to national judges. Second is that detention of foreign consultants and summary dismissal of members of the judiciary threatens foreign investor confidence – something desperately needed if Timor-Leste wants to wean itself off its oil dependency. The government is in the middle of a number of major investment projects ranging from a $350 million cement plant to upgrading of major transport infrastructure, and this move could seriously hamper confidence of potential investors. Third, the decision could threaten the government’s case for ASEAN accession. The government may have inadvertently given Singapore, the staunchest opposition to Timor’s bid to join the group, enough ammunition to continue blocking its admission. And finally, in the wake of a recent onslaught on media freedoms, this interference with the justice sector begs the question: As one of the remaining pillars of democracy in Timor-Leste, is civil society next?