From the Arab Spring to the current demonstrations in Hong Kong, much has been said about the power of youth movements and the impact of social media on political development in countries like Cambodia where freedom of speech, assembly, and association is often restricted. In the run up to the 2012 local elections here, Foreign Policy published a controversial article entitled, “Betting on a Cambodian Spring,” that argued that “the Arab Spring has shown that democratic reformers can triumph even under the most improbable of circumstances.” 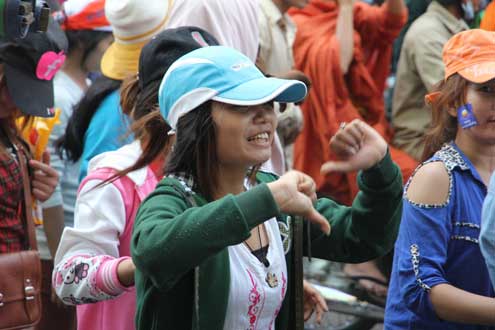 It is easy to see why Cambodia’s bulging youth demographic, where over 60 percent of the population is under the age of 30, fosters comparisons with the political upheaval in North Africa and the Middle East. Since the 2013 elections, in which the ruling CPP party won a surprisingly narrow victory over the opposition CNRP, there has been renewed debate over whether or not Cambodia would potentially see an Arab Spring style revolt. Many observers cited the increase use of the internet as a leading indicator, and social media sites of the opposition containing campaign messages and other political propaganda were said to be reminders of how the Arab Spring started. Undoubtedly, social media did play an important role in the opposition’s election campaign last year. Thy Sovantha, a 19-year-old popular political activist who supports the CNRP, for example, has a Facebook page with more than 450,000 likes.

In fact, the CNRP now has a dedicated social media team to reach an audience clamoring for information about what is happening in the country. Playing a quick game of catch-up, Prime Minister Hun Sen now has his own very active Facebook page, and followers and observers alike cite the number of likes on the Facebook page of Sam Rainsy (966,284 likes) and Hun Sen (573,087 likes), treating the thumbs up as a proxy for popularity.

Yet overemphasizing the political importance of social media, while overlooking the deeper social and economic transformations that are taking place in Cambodia, is dangerously simplistic. The internet (primarily Facebook) is playing a much more important role as a bridge between citizens and the global community than it is in creating upheaval. With an estimated 230,000 new youth looking for work each year, online job sites such as bongthom.com are rising in popularity. Youth are also seeking intimate relationships, new fashions, entertainment, news, and overseas and domestic educational opportunities through social media. In a country where traditional media is thought to be either state run or state affiliated, youth are using smartphones, not as a tool of defiance, but as a means to navigate expectations, which means sometimes bypassing unresponsive institutions that don’t readily meet their own needs. Cambodians are using their smartphones overwhelmingly for social and economic purposes to get jobs, shop, play games, send money, listen to the radio, connect to each other, debate, and find new ideas.

A new research report, published by The Asia Foundation, Open Institute, and USAID, provides a more comprehensive understanding of mobile phone and internet usage in Cambodia’s rapidly changing society. The study shows that 93.7 percent of Cambodians have their own mobile phone, and over the last year alone, smartphone penetration grew by 30 percent – an impressive statistic in a country where four out of five Cambodians live in rural areas and only one in three has access to electricity. The study found that 38.6 percent of the urban population and 20.7 percent of the rural population have smartphones. While some 26.7 percent of Cambodians claimed they use the internet (44.7% in urban areas and 19% in rural areas), 19.1 percent of Cambodians claimed to have accessed the internet from their own phone (32.5% and 13.4% for urban and rural users, respectively). A separate poll conducted by the Broadcasting Board of Governors and Gallup released in November suggests a similar trend that among those who “accessed the internet in the last week,” the overwhelming majority (89.2%) used a mobile phone to do so. In short, the smartphone is quickly becoming the country’s aorta to the internet and the global commons.

Treating social media as a political threat rather than a development resource would be a mistake for Cambodia. On November 20, the Council of Ministers’ Press and Quick Reaction Unit proclaimed in the Royal Gazette that it had created a “Cyber War Team” to monitor social media to “protect the government’s stance and prestige.” But moves like this risk infringing on freedom of expression, reinforcing citizens’ fears of the state rather than fostering goodwill towards it. The good news is that at the present rate of change, largely driven by increasing smartphone penetration, almost all phones in Cambodia will be able to use Khmer script in less than three years, thus opening the possibility of inexpensive, widespread communication in Khmer for all citizens.