San Francisco, February 20, 2015 — The contemporary aid landscape is changing dramatically and Asian donors are playing an increasingly larger role in aid delivery. Against this backdrop, and following on the 2011-2014 collaboration between The Asia Foundation and the Korea Development Institute (KDI), the partners today signed an extension of the Memorandum of Understanding (MOU) on “South-South Development Cooperation Dialogue.” Extended through December 2015, the series will continue to spotlight the unique perspective of emerging Asian donor countries, including Korea’s role in shaping aid effectiveness in the developing world. View a slideshow of the partnership. 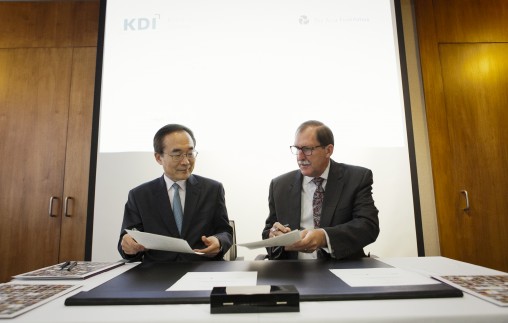 President of the Korea Development Institute (KDI) and the KDI School of Public Policy and Management Dr. Joon-kyung Kim and The Asia Foundation President David D. Arnold at signing ceremony.

At the signing ceremony earlier, The Asia Foundation President David D. Arnold and the President of the Korea Development Institute (KDI) and the KDI School of Public Policy and Management Dr. Joon-kyung Kim spoke of the many successes and impacts of the multi-year Asian Approaches to Development Cooperation (AADC) dialogue series. KDI is Korea’s premier policy think tank, providing rigorous perspective and expert advice on a range of Korean and international policy issues. The Asia Foundation is a nonprofit international development organization increasingly recognized as a respected resource for locally-driven, context-specific, and flexible approaches in addressing the region’s most critical development issues.

South Korea has undergone a dramatic economic transformation in recent decades, and the Foundation has been on the ground for 60 years assisting in that transition. The nation became the first major recipient of official development assistance from the OECD to turn into a major donor.

“I firmly believe Korea can promote greater development cooperation and effectiveness by playing the role of bridge between North and South countries,” said Dr. Joon-Kyung Kim, President of the Korea Development Institute. “Korea can also play an important role in facilitating knowledge sharing. Today, development aid is increasingly knowledge-driven, and Korea has many valuable lessons and experiences from its development that we can share with developing countries.”

“Korea has emerged as an important global player in development cooperation,” said The Asia Foundation President David D. Arnold. “We are pleased to expand our special partnership with KDI in bringing together traditional and emerging Asian donors to spotlight the unique perspective of emerging Asian donor countries.”

In 2011, the first year of the Asian Approaches dialogue series culminated at a side event at the Fourth High Level Forum on Aid Effectiveness (HLF-4) in November in Busan, Korea, the world’s most important forum for international development and foreign aid issues. Since then, the Foundation and KDI dialogue series has brought together more than 100 leading experts and practitioners from across the region as well as from the U.S. and Australia to examine commonalities and differences among Asian development cooperation approaches.

Given the increased interest, policy dialogue, and research on emerging providers and the changing aid landscape, the theme in 2015 will return to a focus on “Advancing South-South Cooperation: Asian Approaches to Partnership, Governance, and Management of SSC.”

Read more about the Foundation and its work in Korea and Development and Aid Effectiveness.