By Véronique Salze-Lozac'h and Amy Warren

Asia’s developing economies will continue their steady growth, with GDPs expected to rise by an average of 6.3 percent in each of the next two years, according to the annual flagship report, Asian Development Outlook 2015, from the Asian Development Bank (ADB). But to ensure that this growth is equitable, policymakers will need to confront a host of challenges, including underdeveloped financial systems that make access to finance difficult for small businesses and low-income households. With only 27 percent of adults having a bank account, and only 33 percent of firms having a loan or line of credit, greater financial inclusion – the theme of this year’s report – is gaining recognition as an essential component of Asia’s economic development. Now, new technologies and development strategies are beginning to address this increasingly urgent necessity. 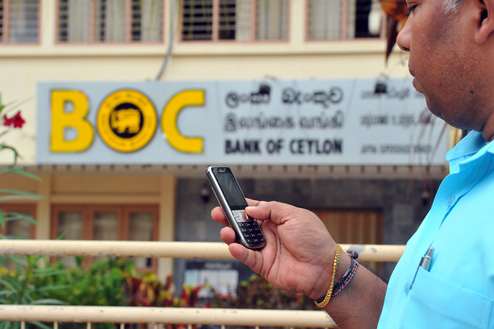 Mobile banking may be the future of financial inclusion. Photo/Karl Grobl

Broad-based, affordable access to financial services has a well-documented link to economic opportunities for the poor. It provides households a way to save and to borrow in emergencies, and it helps micro, small, and medium-sized enterprises (MSMEs) obtain business loans that are vital to productivity, competitiveness, and innovation. The ADB report found that a 10 percentage point increase in the ratio of private sector credit to GDP is correlated with a 0.3 percentage point bump in GDP per capita in Asia’s developing economies.

Yet the high cost of operations in remote areas often makes traditional banking services there impossible. Many commercial banks also reject small deposits, due to high transaction costs, even though small, frequent transactions tend to be the norm for poor, rural households. Asian firms also face steep interest rates and collateral requirements, and must navigate complex application procedures to obtain loans. Other barriers include high fees to maintain an account and onerous documentation requirements. As a result, large swaths of low-income populations in Asian countries are substantially disconnected from the formal banking system. The World Bank’s latest Global Findex report, released this April, estimates that 490 million people throughout East Asia and the Pacific are still unbanked, mostly in developing countries.

Fortunately, rapid advances in information and communications technologies have begun to show enormous potential for expanding financial inclusion in Asia. In particular, mobile banking, which allows people to conduct various financial transactions through mobile devices such as cellphones and tablets, is proving to be a cost-effective way to deliver financial services to the poor, reducing costs by up to 19 percent according to the ADB report. The use of these “mobile money” services has already taken off in Africa, with account holders comprising 10 percent or more of the population in 13 countries, and 58 percent in Kenya. In East Asia and the Pacific, mobile banking is still rare – less than one percent of adults have a mobile money account – but the potential remains, given the region’s explosion in cellphone users, who are expected to account for over half of all cellphone subscribers worldwide by 2020.

The emergence of online crowdfunding platforms such as Kickstarter represents another avenue for promoting financial inclusion, since it serves as a potential source of capital for small businesses. Interest in crowdfunding is surging in Asia as a way to finance innovative startups. Singapore recently hosted the region’s first crowdfunding summit, and Thailand, Indonesia, the Philippines, and Cambodia have expressed interest in developing a vibrant crowdfunding ecosystem. In addition to traditional crowdfunding, where donations are not repaid, crowdfunding has transformed the microfinance industry, with online, peer-to-peer microlending platforms like Kiva.org and Zidisha.org allowing the general public to make loans to small enterprises and aspiring entrepreneurs. (Of course, entrepreneurs will still need to develop financially viable projects and compelling campaigns that attract funding, and investors will need the tools and information to assess the prospects of these new startups as accurately as possible.)

Private sector investment also has a significant role to play in advancing broad-based financial inclusion, particularly the emerging field of “impact investing.” Through investments that not only seek a financial return but also target certain social or environmental needs, impact investing is unlocking important new capital sources to supplement government and philanthropic aid and address critical challenges in developing countries. Worldwide, the impact investment market continues to grow rapidly, with $46 billion in sustainable investments under management in 2014, according to a survey report by J.P. Morgan and the Global Impact Investing Network. This includes investments in early and growth-stage microfinance enterprises to speed up financial inclusion, and venture funding of financial services innovation. Among those polled in the survey, microfinance accounts for 21 percent of impact investment assets.

The evolution of new mobile phone technologies and private sector initiatives is certainly encouraging; however, without an enabling regulatory and policy environment, today’s steady gains will be ephemeral. Stronger governance of financial institutions is still needed in many developing Asian countries to promote investor confidence and protect investors and lenders, along with more transparent business environments, open markets that allow fair competition, and effective dispute resolution mechanisms. The World Bank has found that when financial inclusion is part of a government’s national strategy for economic growth, the country is more successful in broadening access to financial services for low-income populations. Thus, policymakers across Asia must work with the region’s private sector and financial institutions to reach the millions of unbanked and underserved people, and ensure greater financial inclusion and equitable economic opportunities for all.

Véronique Salze-Lozac’h is The Asia Foundation’s senior director for economic development programs, and Amy Warren is a program associate in economic development. They can be reached at veronique.salze-lozach@asiafoundation.org and amy.warren@asiafoundation.org. The views and opinions expressed here are those of the authors and not those of The Asia Foundation.