By Tessa Toumbourou and Lies Marcoes

Earlier In Asia articles have described how land-based and extractive industries – most significantly palm oil plantations, timber concessions, and mining operations – are quickly ravaging Indonesia’s remaining forests. Because these industries often affect women differently than they do men, good land and forest governance must include mechanisms and institutions that promote women’s engagement and safeguard their rights. Civil society organizations in Indonesia have a key role to play in improving land and forest governance. But a recent position paper from The Asia Foundation’s SETAPAK program, Achieving Gender Justice in Indonesia’s Forest and Land Governance Sector, suggests that these CSOs may lack the capacity to develop programs leading to gender-just land and forest governance. 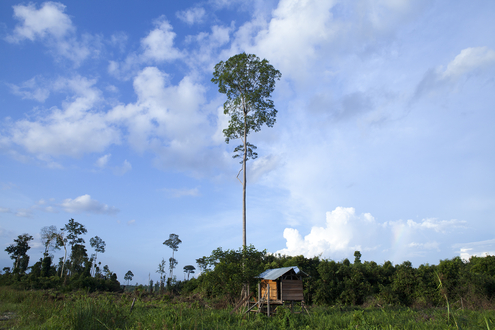 Indonesia now has the world’s highest rate of deforestation, and women often bear the brunt of these developments without enjoying the potential benefits. Under-regulated, market-led growth in the forest and land sectors has led to unsustainable land use and persistent, unequal power relations between women and men.

Studies suggest that women are more dependent on forests, spend more time in forests, and bear more of the burden of meeting their families’ daily needs, often from forest resources. As a result, environmental damage from mines and plantations can affect women disproportionately. Indonesian women spend more time than men on unpaid care work – that is, the unpaid services that support a household. Loss of forest resources, damage to water and soil, and the introduction of agricultural pests increase women’s unpaid work by increasing the distance between dwellings and water sources, fuel, forest products, and agricultural land. When farmland is lost to mines or plantations, men may become workers, increasing the burden on women of caring for their families.

Displacement of communities and the shift from a traditional, subsistence economy to a cash-based economy often rely implicitly on women’s unpaid care work, diminishing other productive and leadership roles for women. Yet women remain largely invisible in forest sector governance. When forest development rights, compensation, and royalties are negotiated, women are commonly excluded, reinforcing women’s lack of land rights or undermining them where they exist by allocating payments only to male heads of households. Female-headed households may receive no compensation at all.

Civil society organizations in Indonesia are working hard to slow deforestation and improve forest governance, but there is growing concern that they lack the ability to address these disproportionate impacts on women. The SETAPAK position paper provides a brief overview of the principal gender issues for CSOs and other stakeholders working on forest and land governance. The report confirms the findings of previous studies that forest governance CSOs have been slow to “mainstream” gender justice – to place it at the core of their work and program goals – in part because of a limited understanding of the gender-related aspects of land and forest resource management.

SETAPAK’s NGO partners in forest and land governance issues have made some progress in mainstreaming gender – supporting legal recognition of forest tenure for communities in Ketapang, West Kalimantan, for example, and supporting a citizen lawsuit in East Kalimantan over the impacts of coal mining on the livelihoods of women farmers. But substantial hurdles remain. Women’s roles in the forest sector tend to be invisible and informal, leading to poor working conditions and lower remuneration. Women’s knowledge of forests, their uses, and management practices is frequently not reflected in governance mechanisms such as forest management unit committees. Women’s limited access to education can also be a factor.

A summary paper, The Fight for Forest Control and the Struggle of Indigenous Women, produced by researcher Mia Siskawati of INSIST, the Indonesian Society for Social Transformation, with support from The Asia Foundation, reports similarly that, since the Constitutional Court ruling in 2012 giving legal recognition to customary forests, indigenous communities have been assisted by CSOs in many regions to secure tenure over their forest claims, but the position of women and other marginalized groups in this process has been limited.

The SETAPAK position paper offers key recommendations to help CSOs develop gender-sensitive advocacy and programming, and to contribute to the improvement of gender justice and women’s participation in forest governance:

Researchers have found that when women are involved in community forest-management institutions and have decision-making positions, it leads to improved forest governance, resource sustainability, and gender equity.

Gender justice is a guiding principle of The Asia Foundation’s SETAPAK program, which promotes good forest and land governance as fundamental to reducing greenhouse gas emissions and ensuring that the benefits of natural resources are distributed sustainably and equitably.