The social enterprise scene in Malaysia is a nascent, growing space. It is estimated that only 100 of these socially oriented, hybrid enterprises exist in Malaysia, tackling causes such as education, environmental sustainability, rural development, and poverty. It’s a strikingly low figure, considering that just across the border, over 120,000 social enterprises are currently at work in their communities in Thailand. 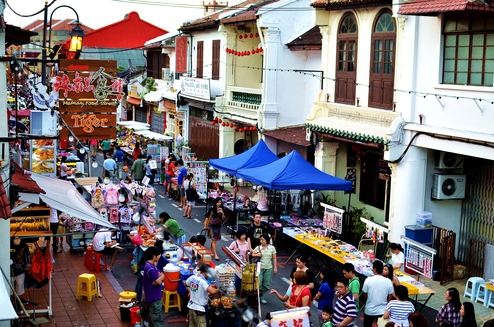 The social entrepreneurship scene in Malaysia has a long way to go, and its success hinges on the development of a healthy ecosystem. Photo/Amir Shariff

Homegrown social enterprises have the potential to make a lasting impact on society by providing innovative business solutions to intractable social issues. This could be valuable for Malaysia, where many traditional for-profit, non-profit, and public institutions have become outdated and unable to deal with a range of social and environmental issues that are detrimental to the nation’s long-term growth and development. For example, there is a clear lack of social innovation in the energy industry: Malaysia is still heavily reliant on non-renewables as primary sources of energy.

Malaysian Prime Minister Najib Razak took a much-needed step toward fostering a larger social enterprise community when he unveiled the National Social Enterprise Blueprint on May 13, 2015. Under the Blueprint, the government has allocated RM 20 million to the Malaysian Global Innovation and Creativity Centre (MaGIC) to increase the number of social enterprises to 1,000 by 2018. By that time, the social enterprise scene should have matured into a dynamic and self-sustaining sector.

But before this new sector can emerge, there are barriers to overcome.

The lack of a legal definition of a “social enterprise” is one issue that has been a persistent source of confusion. Often falsely perceived as charities, social enterprises are, in fact, profit-making businesses, but with a strong social and environmental purpose. For example, Earth Heir is an ethically driven business that sells handmade scarves and clothing. It donates 10 percent of its revenue to charities that support victims of human trafficking. Another social enterprise, Epic Homes, builds relationships between Malaysia’s indigenous orang asli population and urban communities through the construction of homes.

Another pressing challenge for social enterprises is the ability to secure funding. Social enterprises often have difficulty raising capital, either in the pilot or the growth stage. While older social entrepreneurs can at least draw on the networks they’ve built in the course of their careers, younger entrepreneurs who are fresh out of university struggle to find financing. According to the Blueprint, more than 21 percent of social enterprises lack adequate funding. Accordingly, MaGIC has committed over RM 500,000 to five social enterprises – Epic Homes, Mabul Skills Project, MakanLah, Tonibung, and Arus Academy – under the Amplify Awards. But funding comes at a price. Entrepreneurs risk losing their creative autonomy when external investors get involved in the business; they may have to modify their visions to satisfy investors’ demands.

The Blueprint encourages the formation of a strong, supportive ecosystem of social entrepreneurs through incubators and accelerator programs that offer them business consulting, legal advice, recommendations for co-working spaces, and networking opportunities with others in their industries. In June 2015, MaGIC launched its first accelerator program for social enterprises. This project is meant to expose business owners to key influencers in their industries. Social Enterprise Alliance Malaysia (SEA) runs its own incubator programs, which are typically long term. In exchange for equity in the company, SEA helps companies at all stages develop their businesses into viable models. Tandemic, on the other hand, helps foster connections between social entrepreneurs and industry experts.

One of the largest concerns for social entrepreneurs is making a profit. The reality is that these businesses have to make enough money to support their ongoing operations before they can effectively benefit society. It’s a tough balance to strike, and things are looking rather bleak at the moment, with more than two-thirds of Malaysian social enterprises struggling to break even.

Social enterprises must wrestle with several other questions. How do you measure social impact? It’s a key index of a social entrepreneur’s success that can also help investors get a better sense of their possible returns. Product-based social enterprises such as Earth Heir also face distribution and marketing barriers. Low public awareness of social entrepreneurship makes it difficult for these businesses to gain support from the Malaysian community. Finally, social enterprises that deal with the government can face difficulties reaching out to their target audiences due to bureaucracy.

The social entrepreneurship scene in Malaysia has a long way to go, and its success hinges on the development of a healthy ecosystem. The numerous incubators and accelerator programs will be key in spurring social enterprises in the right direction. Building the right mindset among social entrepreneurs will be just as important in forming a robust, supporting culture. Entrepreneurs should keep in mind that they should not try to outdo each other. Rather, social enterprises should work together to ensure that they succeed on their own terms. After all, these businesses have the same end goal – to impact society in a positive way.

Having said that, social enterprises must remember that they are also businesses. While it is laudable that they strive to create social good, they cannot overlook the need to profit financially from their activities.

Amanda Yeoh is an intern with The Asia Foundation’s International Development Cooperation program based in Malaysia. She is heading off to Wesleyan College this fall and can be reached at [email protected]. The views and opinions expressed here are those of the author, not those of The Asia Foundation.