The Asia Foundation Releases 2015 Survey of the Afghan People 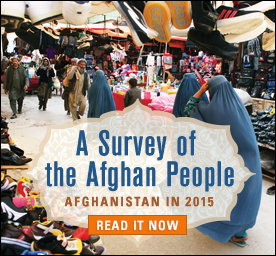 Kabul, November 17, 2015 — Afghan optimism about the overall direction of the country and confidence in government fell to their lowest point in a decade, while fear for personal safety increased to a record high. Afghans cite deteriorating security, unemployment, and corruption as the main reasons for their pessimism. These are among the main findings of an annual Asia Foundation survey conducted with 9,586 Afghan citizens representing 14 ethnic groups and all 34 provinces in June 11-28, 2015. This year’s Survey of the Afghan People includes new questions on youth, ISIL/ISIS, women in leadership, migration, and mobile phone access. Read the executive summary, FAQ, and over ten years of analysis at https://asiafoundation.org/where-we-work/afghanistan/survey/.

The longest-running and broadest nationwide survey of Afghan attitudes and opinions, the annual survey provides insight into the views of Afghans on issues central to the country’s development. More than 75,000 Afghans have been polled since 2004, and all data is public. The 2015 findings are particularly useful for Afghans and the international community given the country’s rapidly evolving environment.

Optimism has declined since the Foundation conducted its last annual survey in June 2014, immediately following Afghanistan’s presidential runoff election where the national mood was high. Afghanistan has seen the formation of the National Unity Government (NUG) after a contentious election process, a deteriorating economy in the face of declining international aid and foreign military spending, and the full assumption of security responsibilities by Afghan forces amid increasing attacks by armed opposition groups.

“Afghanistan experienced the impact of the three simultaneous security, political, and economic transitions in 2015,” said Abdullah Ahmadzai, The Asia Foundation’s Country Representative in Afghanistan. “Against this intensely challenging backdrop, the 2015 survey reflects Afghans’ understandable concerns, and a frustration that more progress isn’t being made. The results show increased skepticism in the government’s ability to effectively address these challenges. The survey is also a clear signal to the international community and regional neighbors that steadiness, patience, and support are what’s needed as Afghanistan struggles to achieve peace and stability.”

A decline in optimism and a growing sense of fear

This year’s survey shows that Afghan optimism about the overall direction of the country declined to the lowest point in a decade, after steadily rising through 2014. More than half of all Afghans (57.5%) say the country is moving in the wrong direction. The number of Afghans who say they are afraid for their personal safety is at the highest recorded level (67.4%) since the survey began. The survey also reveals that the growing perception among Afghans that the Afghan National Security Forces need foreign support to operate—in June 2015, 82.8% of Afghans say the Afghan National Army needs foreign support; 80.1% say the Afghan National Police needs assistance; and 70.4% say the Afghan Local Police needs foreign support—all up from 2014. ISIL/ISIS has had an impact on Afghans’ perceptions of their safety: nearly three out of four respondents say they have heard of ISIL/ISIS and 40.3% of all Afghans say the group poses a threat.

Afghans are less confident in their public institutions

Public opinion of Afghanistan under the NUG is mixed—the proportion who say the national government is doing a good job has fallen to 57.8%, down from 75.3% in 2014 when election promises of improvements in governance and services contributed to a sense of hope. The proportion of Afghans who say they are satisfied with the democratic process in Afghanistan has also declined, from 73.1% in 2014 to 57.2% in 2015—an all-time low. At a local level, the number of Afghans who say they can impact local government decisions has also decreased, from 55.9% in 2014 to 44.5% in 2015. And despite government efforts to curb corruption, 89.9% of Afghans say corruption is a major problem in their daily lives, the highest percentage reported since 2004.

Afghans still unsatisfied with delivery and provision of public services

Long-term survey data since 2004 shows that Afghans have seen progress in the delivery of basic government services. In particular, satisfaction with electricity and drinking water have steadily increased, but satisfaction with most services dipped between 2014 and 2015. 56.3% of Afghans say public services—electricity, roads, drinking water, education, healthcare, and water for irrigation—are the most common problem Afghans face on a local level, and cited as one of the major problems facing the country as a whole. When asked about a range of public services in 2015, 71.8% of Afghans report the highest level of satisfaction with access to drinking water, a long-term improvement since 2006. Education is absolutely crucial for Afghans—and 67.8% of respondents report satisfaction with the quality of education for children in their area but satisfaction for education has decreased in all regions in 2015 compared to 2014.

“The annual survey provides a picture of a nation undergoing extraordinary change, and the concerns, hopes, and experiences that accompany such change,” said David D. Arnold, The Asia Foundation’s President. “Year after year, the survey reveals that the delivery of basic public services—health, education, roads, drinking water, sanitation—are crucial to people’s perceptions of their government’s capability, and are an antidote to extremism, instability, and vulnerability.”

Youth cite unemployment and illiteracy as biggest challenges; the increasing availability of media and access to information seen as bright spot

Nearly half of Afghanistan’s population is under age 18, one of the largest youth bulges in the world. As foreign aid declines, Afghans say unemployment (71.4%) and illiteracy (26.5%) are the two biggest problems facing their youth. A source of optimism is Afghanistan’s expanding media sector and increasing availability of sources of information from around the world, which continues to shape public opinion. Media (66.6%) remains the most trusted institution alongside religious leaders (64.3%), and ahead of government institutions and NGOs. In 2015, 62.1% of Afghan households own a television, a number that has almost doubled in the last eight years. A majority (82.3%) report owning at least one mobile phone in their household, compared to 41.5% in 2007; and 21.0% report having someone in their household who has access to the internet.

This year included many milestones, opportunities, and disappointments for Afghan women. On the positive side, 2015 saw wins for women in Afghan politics: the cabinet now includes four female ministers and the government appointed two new female provincial governors. Afghan women are increasingly aware of their rights and know which institutions to contact in a domestic conflict. Nearly all Afghans (93.6%) support women’s equal access to education in Islamic madrasas, and a high proportion support equal opportunities at the primary school (84.5%), high school (82.8%) level, and at the university level (73.8%). However, the Farkhunda case and the recent insurgent attacks against educated and politically active women in Kunduz illustrate the serious challenges Afghan women face. As in previous years, Afghans list education and illiteracy (20.4%) and unemployment/lack of job opportunities (11.3%) as the two largest problems facing women.