Last week, Afghanistan’s top election official, Yusuf Nuristani, announced his resignation as head of the Independent Election Commission (IEC), just three months after he announced that the country was slated to hold postponed parliamentary elections in October. Many fear that the move further complicates the country’s beleaguered electoral reform process, what has been marred by multiple controversies and continues to be overshadowed by competing political interests and increasing insecurity around the country. 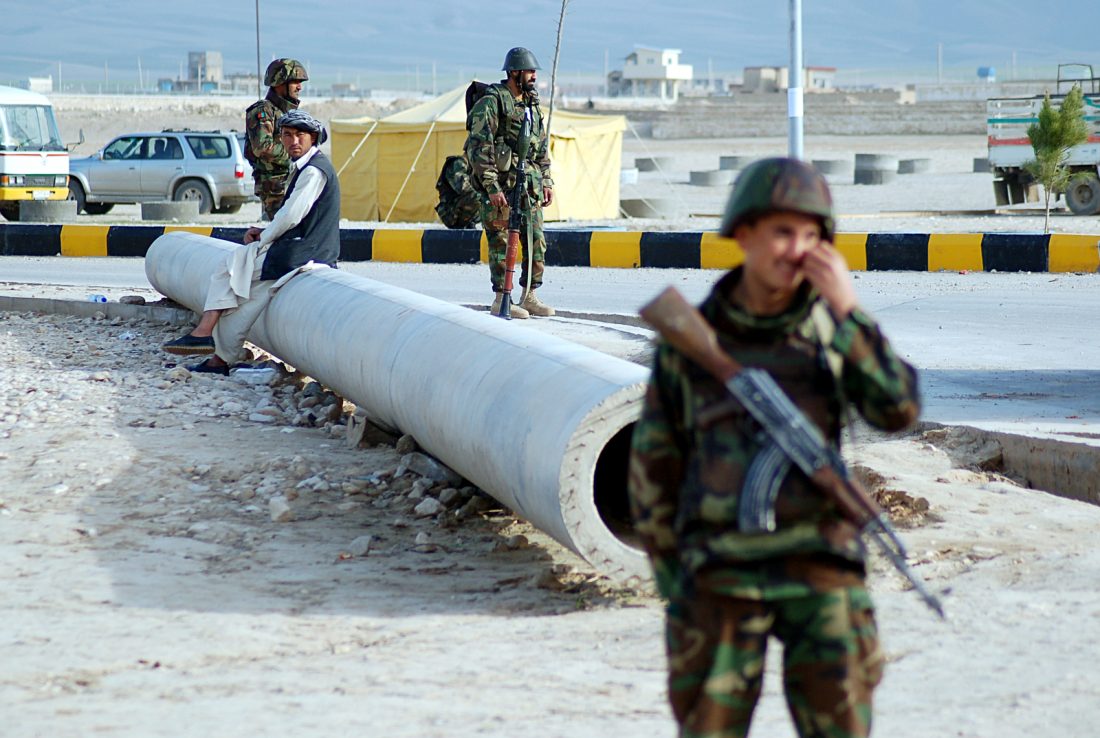 Increasing insecurity across Afghanistan has slowed the electoral reform process, and has made state survival the primary objective for the NUG and international community. Photo/Gulbuddin Elham

The current power play surrounding the process has become a stumbling block to reform. As a key part of the National Unity Government’s (NUG) political agreement, the Special Electoral Reform Commission (SERC) was formed in June 2015, and tasked to put forward recommendations for electoral reform. Two sets of recommendations put forward by SERC were endorsed by the NUG and went to legislature for approval. These were largely technical reforms needed in the electoral process. Key recommendations included the establishment of a Selection Committee responsible for introducing candidates for membership to the IEC and the Independent Election Complaints Commission (IECC), and the introduction of a new electoral system that would shift from a single, non-transferable voting system to a mixed proportional representation system that allows greater roles for political parties and the establishment of single voters’ districts. Other recommendations were: the invalidation of current voter cards, the introduction of new electronic ID cards, 25 percent representation for women on provincial and district councils, and the presence of two foreigners on the IECC.

However, these recommendations were voted down by the Wolesi Jirga (Lower House) in December 2015, mainly reflecting the political tension between the NUG and parliament. In response to the Wolesi Jirga’s rejection, on March 5, President Ghani outlined the structure, authority, and duties of the electoral bodies in a new presidential decree. Unlike the SERC’s comprehensive recommendations, this recent decree has simply reduced the discussion of electoral reform to superficial changes related only to the compositions of the IEC and the IECC. The decree changed the requirements and tenure of the electoral commissioners and directed the establishment of the Selection Committee to look for seven new electoral commissioners for the IEC and nine new commissioners for the IECC.

Recent controversial and political moves by the IEC have further complicated power dynamics. On Feb. 24, 2016, the IEC announced the 2014 presidential election results – 16 months after the establishment of the NUG – confirming Ashraf Ghani as the winner with just over 55 percent of the vote. A month later, the IEC announced that both the Wolesi Jirga and District Council elections would be held on Oct. 15, 2016. These announcements were perceived as purely political because of Nuristani’s appointment by former president Hamid Karzai. So the combination of IEC and parliament pressures might explain the recent presidential decree’s focus only on the composition of electoral bodies rather than substantive electoral reform, so the technical reforms proposed by the SERC are no longer on the table.

Given the current political and security context, electoral reform seems to have dropped lower in the list of priorities for the NUG, even for Chief Executive Abdullah Abdullah and his team who were strongly advocating for a comprehensive reform. As part of the NUG’s political agreement, Abdullah and his circle of allies wanted to expedite the electoral reform process and begin the convening of the Constitutional Loya Jirga (Grand Assembly) to secure the legitimacy of the CEO position. However, it is evident that both camps have little appetite to hold a Loya Jirga and have vested interests in continuing with the status quo. With the NUG’s current low approval rating among the public and emerging political opposition groupings such as the Council of Protection and Stability – with Abdur Rab Rasul Sayyaf as its prominent member – the government enjoys limited political capital to positively influence jirga results in its favor.

Security is the other major factor influencing the momentum for reform. Increasing insecurity across the country has made state survival the primary objective for the NUG and international community in 2016, as suggested by UN mission chief in Afghanistan, Nicholas Haysom. There is very little appetite for electoral reform and subsequently conducting operationally complex and politically tense elections.

If one optimistically assumes that the upcoming parliamentary elections do take place this year, two fundamental, immediate concerns must be addressed: how to increase the IEC’s credibility and how to decrease the likelihood of fraud, manipulation, and a contested outcome. The former will partly be addressed through the Selection Committee, which is tasked to find new commissioners. However, the big challenge is how to depoliticize the IEC and increase its credibility among the public and political elite. Of the eight elections held in Afghanistan, except the first two, the rest have resulted in prolong crisis marred with mass fraud and vote rigging.

In those elections, the main problem was not necessarily technical but political. The broad acceptance of an election outcome by rival parties is as important as the election process and reform itself. This problem can be resolved by keeping the IEC as a technical entity with the sole task of administrating the elections, while at the same time strengthening the IECC by providing dispute resolution powers and authority delegated to the provincial IECC offices. The IECC should function as the ultimate national dispute resolution mechanism. This must be complemented with shortening the reporting period between polling and preliminary result announcements through the use of technology. Evidence from previous elections suggests that the longer the initial result delays, the greater opportunity for rival groups to put pressure on electoral bodies and open up the space for deal-making and fraud.

Ultimately, given the constantly evolving political dynamics and interests, electoral reform might again become a priority and be utilized as a bargaining tool by either camp. However, as things stand now, substantive electoral reform is a distant reality for Afghanistan.