Overcoming Stigma Against Disabilities in Afghanistan

The dusty, narrow streets of Kabul are congested most days, packed with vehicles and bicyclists angling for space. Panhandlers take advantage of the frequent standstills—constantly moving from car to car, tapping on windows and asking for change. These panhandlers are homeless for a variety of complex reasons and include men, women, and children of all ages; they may be displaced due to conflict or lacking economic opportunities, and frequently, they are disabled. Many are blind. 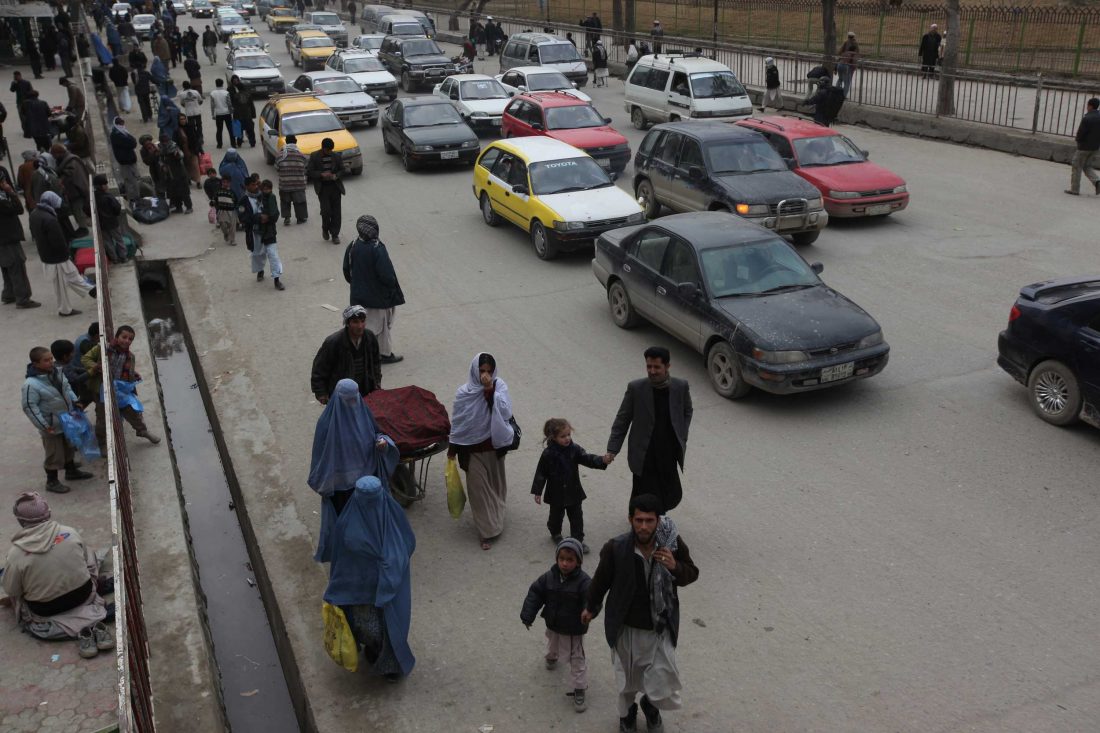 In Kabul’s crowded streets, panhandlers can often be seen taping on windows for spare change. Many are disabled.

There are almost no services to assist and support disabled people in Afghanistan. On top of that, those afflicted face a severe social stigma. When you ask Afghans how they perceive those who are blind, for example, some will say they see them as an incomplete person or blindness a “punishment from God.” This stigma makes it challenging for them to overcome obstacles and contribute to their family’s welfare. However, the obstacles that a disability like blindness presents, even in a place as difficult as Afghanistan, can be overcome. Twenty-nine-year old Muhammad Mustafa Kazemi, who went completely blind as a result of glaucoma by 10th grade, is proof.

Kazemi began his studies at Kabul University in 2010 as the only visually impaired student in his English Language and Literature program. Kabul University was, and still is, not equipped to facilitate the needs of sensory impaired students. Kazemi recalls that as a freshman he used tape recorders to tape lectures and other students reading books. He managed to buy a laptop when he was a sophomore and quickly found a narrator program. Things improved so much that he graduated at the top of his class. 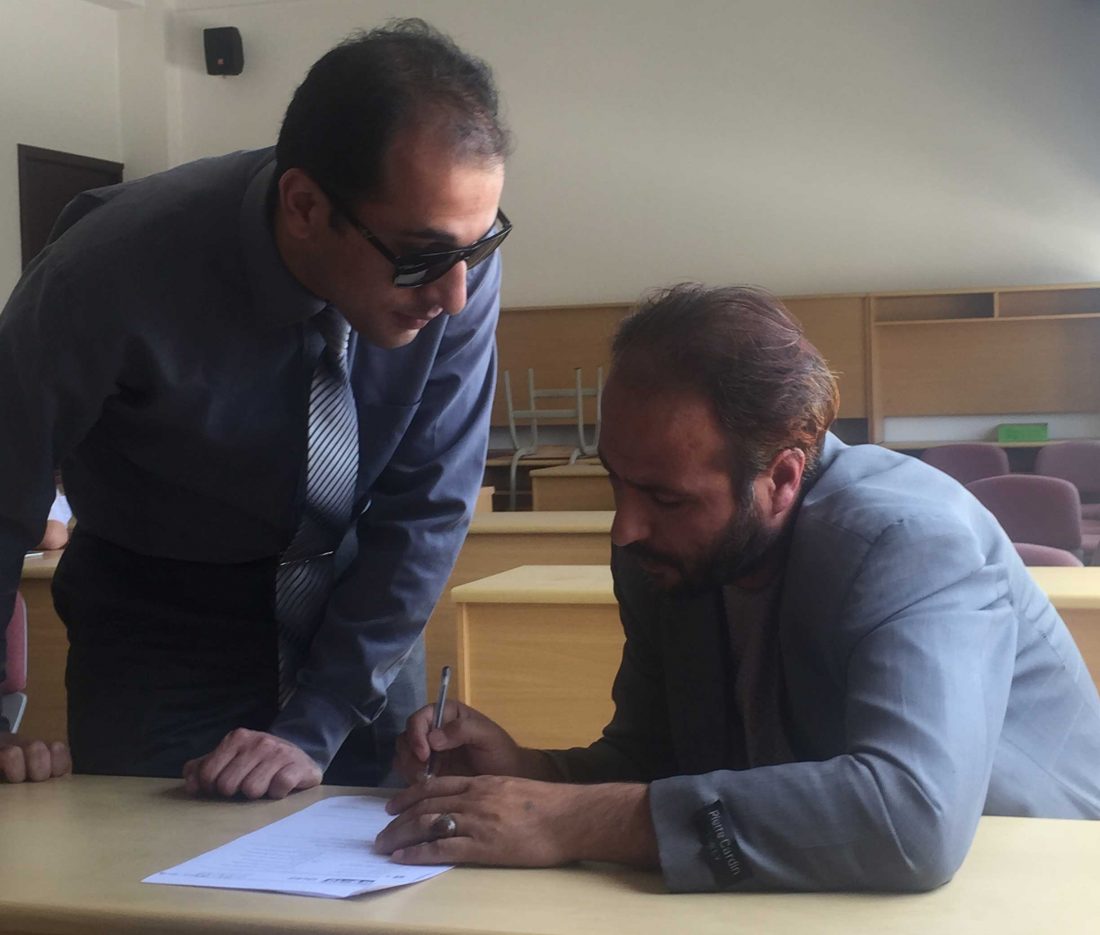 Muhammad Mustafa Kazemi (left) with a student at the General Directorate of Science Education and Technology.

There are no accurate statistics on the number of blind people in Afghanistan, though the World Health Organization estimates that over 400,000 people are blind and about 1.5 million are visually impaired—a term that encompasses both those who are either partially or completely blind. However, if proper eye care facilities were established and maintained, the WHO estimates that 80 percent of blindness would be avoidable. Although Afghanistan’s health care services have been improving over the past 10 years, eye care is still not a top priority for most Afghans—nor do many have the ability to pay for it, even if it was.

These challenges are compounded by poor government enforcement of legislation focused on disabled individuals. Afghanistan has ratified a number of conventions to protect the disabled, including the Convention on Cluster Munitions, the UN Convention on the Rights of Persons with Disabilities, and the Vocational Rehabilitation and Employment Convention. A previously passed national Law of Rights and Privileges of Persons with Disabilities is required to reserve three percent of jobs in the government and private sector to individuals with disabilities, but the law has yet to be enforced: of 376,000 current government employees just 637, (or 0.17 percent) have been hired in the category of the disabled. In addition, the disability law gives preference to those who became disabled as a result of war which has sometimes led those who were born with a disability to claim it happened during a war accident or from a landmine since this is a more acceptable explanation.

Educational opportunities for the disabled are also limited in Afghanistan. There is a single high school in Kabul, the Visually Impaired High School and Vocational School, that is geared toward those who are blind. The school was designed to teach students basic lessons in math, science, and literature, in addition to vocational trainings to prepare the students for future employment. Sadly, on August 24, 2016, a truck crashed through the gate of the institution, and detonated a cargo of explosives in the yard, allowing Taliban gunmen to pour through and into the next-door American University of Afghanistan. Luckily the students and teachers had left for the day, but as of now the school remains closed and in ruins. It does not yet have a reopening date set, though President Ghani promised that it would be.

At the same time, a number of NGOs are stepping in to support those with disabilities. For blind individuals specifically, this includes organizations such as the Afghan National Association of the Blind, Handicap International, and the Afghanistan Blind Women and Children Foundation. While these interventions are critical, support is not widespread across the country, leaving most individuals to rely on their family and friends, where that is an option, for support.

Kazemi knows that he is lucky, and an exception to what most visually impaired individuals experience in Afghanistan. Although his family didn’t always understand his drive to overcome the obstacles in his path, they never stood in his way, and would financially support him when they could. Kazemi also benefitted from learning from his older brother, who has also been blind since he was a child.

Watching Kazemi teach, you notice immediately that the small class of eight science teachers, studying at the General Directorate of Science Education and Technology, listen to their young teacher intently. The students are studying English language as part of USAID’s Strengthening Education in Afghanistan project, implemented by The Asia Foundation. They don’t seem to care that he is blind—just that he is capable and engaging.

“I feel honored to stand in front of a class as a blind man and pass on valuable information to my students,” he says. “I can feel that they enjoy my teaching, and I enjoy them enjoying.” Kazemi would like to continue his education and get both a Masters and a PhD in English language, likely outside of Afghanistan. He then aims to return and work as a professor at an Afghan university, where he says he “hopes to further support the development of my country—and perhaps also one day assist the visually impaired here, too.”