Every year in Afghanistan, over 150,000 high-school students across all 34 provinces take a nationwide tertiary entrance exam, known as the Kankor, required for entrance to all public universities. Based on exam marks, the Ministry of Higher Education then recommends successful candidates to particular universities. However, only about 30 percent pass with high enough scores to make it into a public institute of higher education, a troubling obstacle to Afghanistan’s overall efforts to strengthen access to education.

The exam covers all subjects, including science and art, taught in the high school curriculum. The students who don’t pass only have one more chance to take the exam, or must apply to private school—the cost of which is prohibitive for most.

The low passage rate is primarily a result of the overall weak educational system in the country, as well as limited access to education for the majority of Afghans. According to The Asia Foundation’s latest Survey of the Afghan People, 52 percent of respondents report having no formal or informal government or private education, including two-thirds of women and nearly 38 percent of men. The issue is compounded by limited preparation by students, who in most cases do not have access to the necessary training resources.

The current system effectively deprives over 100,000 students a year from accessing higher education. They are instead compelled to look for low-paying jobs due to their lack of professional skills, which negatively affects both an individual’s confidence in pursuing better opportunities and his or her ability to contribute to the country’s economic development.

Since 2014, The Asia Foundation, with support from the United States Agency for International Development (USAID) under the Strengthening Education in Afghanistan (Phase II) project, has been providing a wide range of support to institutions and civil society organizations working in Afghanistan’s education sector to address emerging and strategic education needs. 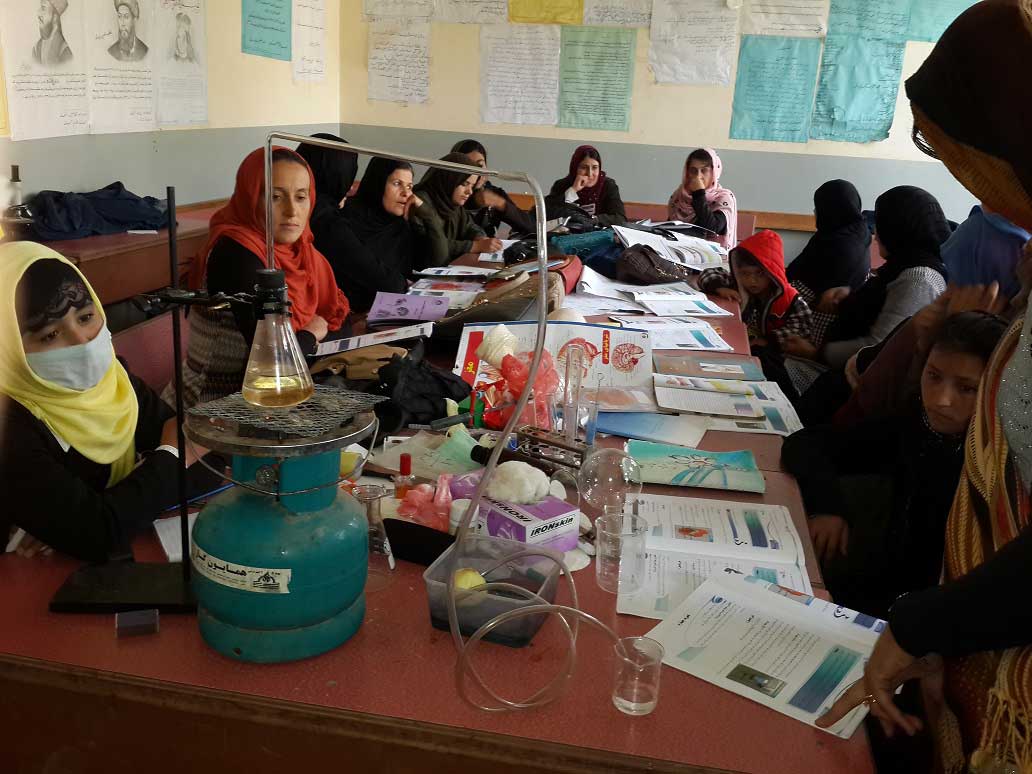 So far, 18 schools have been selected in Khost and Badakhshan and 10 in Kandahar to pilot the teacher training program. Above, a science and mathematics training takes place in Badakhshan.

One aspect of this work is a new project with the General Directorate of Science and Educational Technology (GDSET), and that helps to increase the number of students accessing tertiary education in Afghanistan by providing science and math training (which makes up over 50 percent of the Kankor) to public high school teachers in Afghanistan’s three lowest-Kankor-scoring provinces: Khost, Kandahar, and Badakhshan. 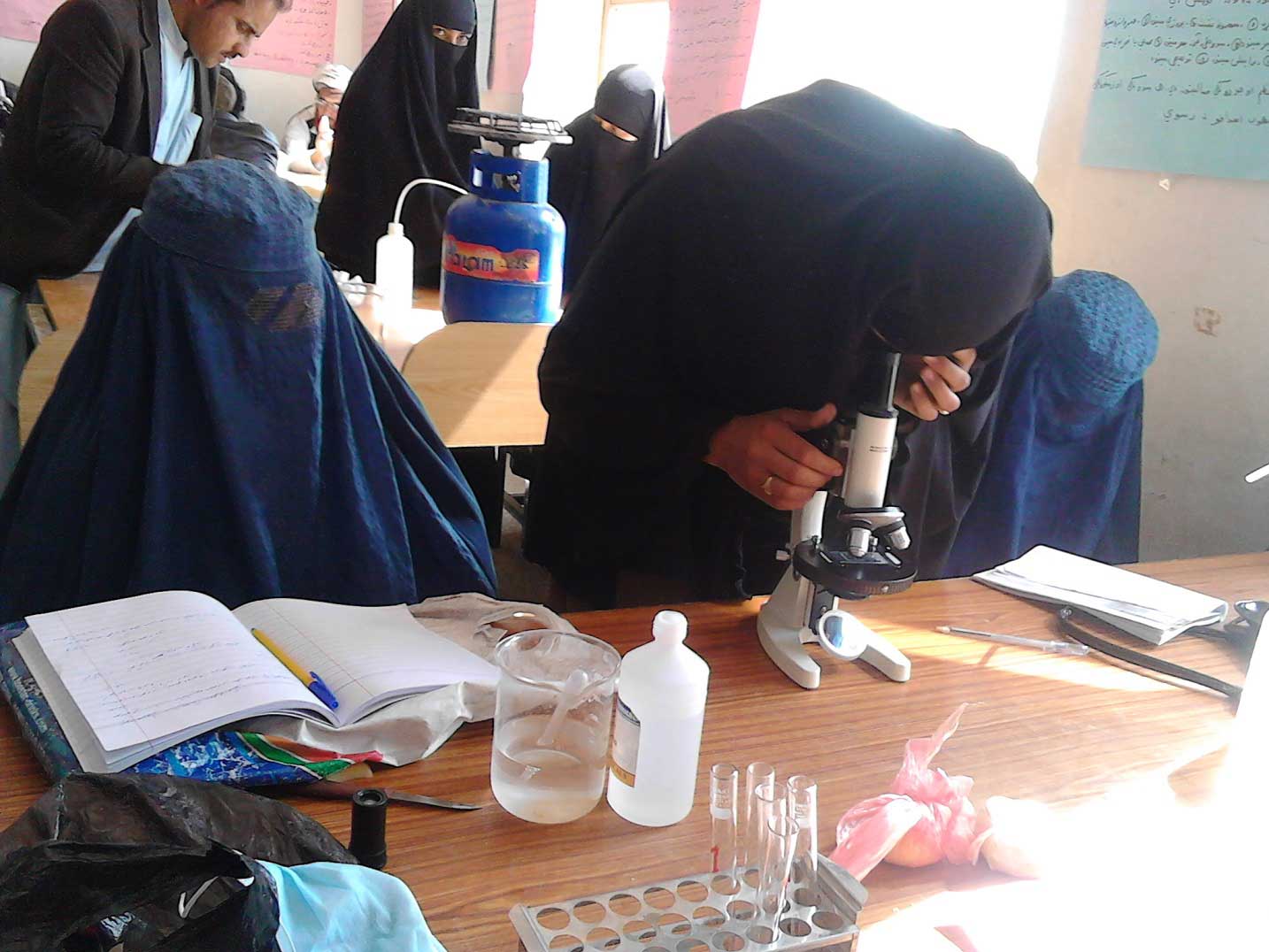 Teachers participate in a biology class in science training in Khost province.

So far, 18 schools have been selected in Khost and Badakhshan and 10 in Kandahar to pilot the teacher training program to improve teaching methods and knowledge in the schools’ faculties so that GDSET-trained teachers are ultimately equipped to provide higher-quality instruction to their students. The schools in all three provinces represent a mix of rural and urban demographics, including both boys’ and girls’ schools and schools that have not received any past international or national assistance.

A total of 312 teachers have been trained in Khost and Badakhshan so far, with 167 currently in progress in Kandahar. To ensure high-quality training, master trainers from the Kabul GDSET office were assigned for one month as trainers, and provincial GDSET trainers were appointed as assistant trainers in these provinces. The training resulted in a significant increase in the knowledge of the teachers: the results of the post-tests indicated a 41.7 percent increase in the knowledge of teachers in Khost and a 41.4 percent increase in Badakhshan.

So that the newly trained teachers could apply the knowledge and skills from the trainings, the Foundation, with the help of our partner organization, the Afghanistan Rehabilitation Education Program (AREP), equipped the laboratories of the target schools with more than 300 different materials, including microscopes, light boxes, and steady power supply sources. The classes were regularly monitored in order to measure the effects of the training.

According to the monitoring data, practical and laboratory methods contained almost 42 percent of the teaching methods used in the classes after the training, as opposed to just 17 percent before the training. Additionally, 74 percent of the teachers were applying the acquired skills and knowledge in their actual classes. Extracurricular activities such as science fairs and inter-school competitions were held in and among the target schools to give the students a chance to demonstrate and practice their scientific capabilities and knowledge. To further help students with Kankor preparation and the exam, we provided over 1,000 Kankor guide books to 12th-grade students in the Khost and Badakhshan target schools before the Kankor exam.

In Afghanistan, a college education is a huge asset in a tough labor market and a stagnating economy, and gives individuals the opportunity to enter the formal labor market, rather than seeking out informal options. These young Afghans who are one step closer to a university education will make up the next generation of decision-makers for the country, and their education in turn translates into an investment for in the future of Afghanistan’s development.