On January 19 in Seoul, The Asia Foundation gathered Korean experts and the authors of the Foundation’s new report, Asian Views on America’s Role in Asia: The Future of the Rebalance, for a panel discussion on U.S. foreign policy toward Asia, with a particular focus on how those policies could shift under the new U.S. administration. 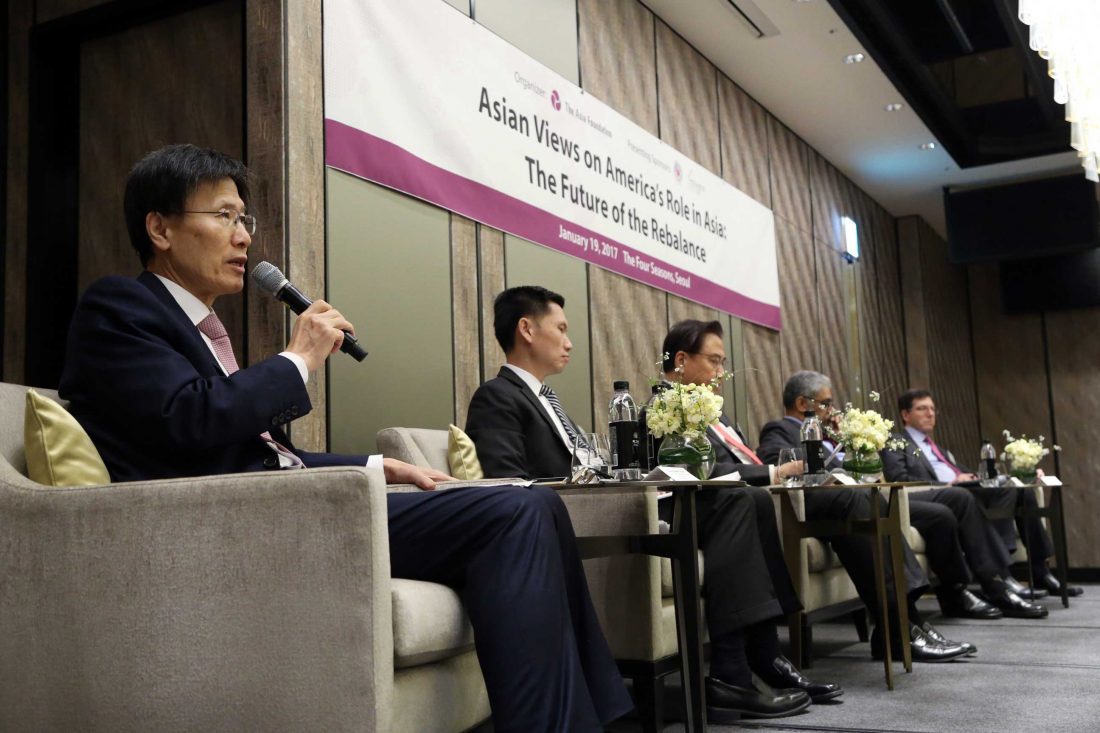 Panelists discuss U.S. foreign policy toward Asia at the Seoul rollout of The Asia Foundation’s report, Asian Views on America’s Role in Asia.

The report, the Foundation’s signature foreign policy initiative, serves as a balanced set of strategic recommendations for the new U.S. administration on foreign policy toward Asia, drawn from a series of closed-door, high-level meetings with Asian and American experts in the three sub-regions of Northeast Asia, Southeast Asia, and South Asia. Co-chairs of the report and presenters at the Seoul event included: former Foreign Minister of Korea, Yoon Young-Kwon; Thitinan Pongsudhirak from Thailand’s Chulalongkorn University; founding director of the India Centre of the Carnegie Endowment for International Peace, Raja Mohan; and Harry Harding, professor at University of Virginia’s Frank Batten School of Leadership and Public Policy.

The issues discussed at the panel—from security and trade to denuclearization and globalization—could not have been more timely for Korea and the region. At that very moment, change was in the air: the impeachment trial of Korean President Park Geun-hye was in full swing, and the following morning a new U.S. president would be sworn in. In his opening remarks, Korea’s former Foreign Minister, Han Sung-Joo, commented on the palpable anticipation of working with two new administrations—in the U.S. and in Korea, adding: “The new U.S. president is causing much expectation regarding how he is going to handle his country’s foreign affairs, particularly its policy toward Asia.”

Park Jin, former member of the National Assembly of Korea and professor at Hankuk University of Foreign Studies, facilitated a lively discussion with the report authors, and set the stage with thoughts on the importance of the Asian Views on America’s Role in Asia report and the implications that the new U.S. leadership holds for the region.

“Asia will still prove to be important for U.S. national interests … because of Asia’s strong economic vitality, diverse geopolitical conflicts, and the challenges associated with a rising China,” he said.

Presenting a perspective from Northeast Asia, Yoon Young-Kwon observed that “the international community’s North Korean denuclearization policies over the past 20 years have failed,” and claimed that “the incoming administrations of both South Korea and the United States must develop a new and detailed strategy regarding North Korea.” He also discussed the role of Japan and Russia becoming more important than ever. But most importantly he said, “The United States must not shrink from its international leadership role in the multilateral, liberal economic order.”

Thitinan Pongsudhirak offered a Southeast Asian perspective, pointing out that Obama’s “pivot” to Asia has not worked very well in Southeast Asia, and that the rebalance policy has instead enhanced China’s influence. “Southeast Asia’s experience suggests that only in countries where leaders seek a greater good beyond themselves can democracy take hold without reversal. Corruption remains the Achilles’ heel of democracy in Southeast Asia,” he wrote in the report. “Heightened tension between the U.S. and China is a critical point for Asian governments which must be turned into an opportunity to exercise foreign influence.”

Raja Mohan emphasized that South Asian leaders are deeply concerned about America’s long-term commitment to the liberal, global economic order and Washington’s political will to sustain its longstanding international security commitments. As he wrote in the report, there is considerable anxiety in the region about the prospect and consequences of an American withdrawal from Afghanistan, and that America’s continued involvement in Afghanistan is critical for the region’s security and stability.

Offering a U.S. perspective, Harry Harding spoke about the Trans-Pacific Partnership (TPP) which both U.S. candidates had distanced themselves from during the presidential campaign. Even within his “rebalance to Asia” President Obama hadn’t been able to push TPP across the finish line. The question now, Harding said, is what does the future of trade look like in that region with TPP off the table? “If the U.S. doesn’t write the rules,” Harding added, “China will benefit.”

• The U.S. should continue to engage actively in the Asian political, economic, and security environment by continuing to participate in the key regional fora to deal effectively with the changing strategic landscape of Asia. The U.S. withdrawal from the TPP negotiations may reduce the visibility and influence of the U.S. in the Asia-Pacific region in favor of an expanding China in the areas of free trade, financial management, and foreign investment.

• The role of democratic middle powers such as Korea, Japan, Thailand, India, and Australia in the future development of Asia will grow significantly in the decades to come, which should be considered in the formulation of future U.S. policy toward Asia.

• The role of organizations like The Asia Foundation, which produced the report, as channels for regional cooperation and development will become even more important for the future growth and prosperity of Asia.

The Asian Views on America’s Role in Asia: The Future of the Rebalance panel was co-hosted by the Korean-American Association.