The latest “Rule of Law Index” released by World Justice Project ranks Afghanistan 111th among 113 countries—ahead of only Cambodia and Venezuela. Afghanistan’s low position in the annual report, which ranks countries on eight factors, including constraints on government powers, absence of corruption, fundamental rights, and order and security, is a reminder of Afghanistan’s struggle to strengthen the rule of law, despite impressive strides in education, including an increase in the number of law and Shari’a schools since the Taliban were overthrown in 2001.

The report argues that effective rule of law reduces corruption, combats poverty and disease, and protects people from injustices large and small. It is the foundation for communities of peace, opportunity, and equity—underpinning development, accountable government, and respect for fundamental rights. However, in order to establish the rule of law, sound legal education must be widely available within the country—and the curriculum must do more than merely convey legal knowledge; it also must prepare students for professional practice.

Historically, legal education in Afghanistan has been split into two faculties—one for law and one for Shari’a law. Since 2001, the number of law schools has increased and the number of law school graduates has also seen a rise. However, the teaching methods focus on rote review of the theoretical aspects of law, leaving students without the capacity to express thoughts, legal opinions, and conclusions; all practical skills they would require to become effective lawyers. In addition, the critical skill of legal writing, the primary way that information is distributed and recorded in courts and to and from lawyers, has been largely left out of legal education, until recently. 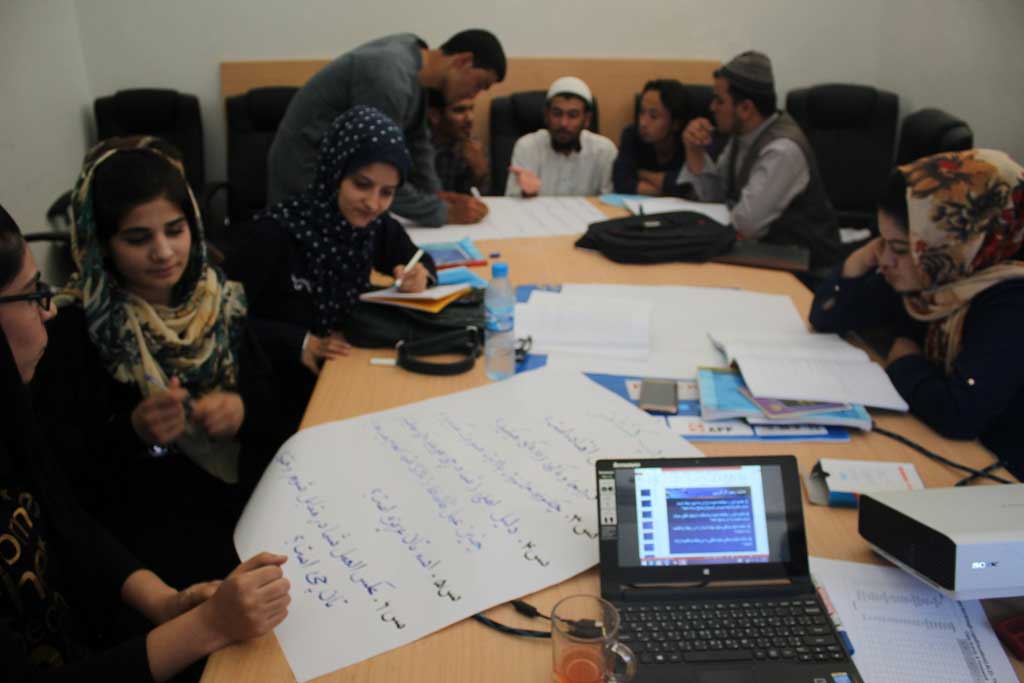 In 2016, The Asia Foundation introduced Afghanistan’s first legal writing courses. The courses, offered in six universities across Afghanistan (Kabul University, Balkh University, Nangarhar University, Herat University, Kandahar University, and Al-Beruni University), are available for students of both the law and Shari’a law faculties. Importantly, these classes include both men and women, who were mixed together in class for the first time (not only are classes usually segregated between the faculties in Afghanistan, they are also usually segregated between the sexes). A core component of the courses is a new textbook that focuses entirely on practical principles and applications such as critical thinking, legal reasoning, legal analysis, legal opinions, and persuasive writing—including motions and mock cases. This course is part of the Increasing Access to Justice for Family Law Clients and Strengthening Capacity of Civil Society and Young Lawyers to Protect Human Rights in Afghanistan program funded by the U.S. Department of State’s Bureau of International Narcotics and Law Enforcement Affairs.

Around 160 students volunteered for the first semester of the legal writing courses. To measure students’ practical legal knowledge, a pre-test was taken by students during the first days of the semester. Findings indicated that students had neither the basic skills of writing a legal document, nor did they know almost anything regarding legal reasoning and legal analysis. As a result, students’ practical legal knowledge and skills at the outset was rated at just 5-10 percent.

Over the course of a single, short semester, Saqib (using the newly introduced textbook) taught the students how to think critically, do legal reasoning and analysis, write legal openings, and practice persuasive writing. At the end of the semester, a post-test asked the students to write a defense statement for a hypothetical scenario by applying the concepts and skills they learned throughout the semester. While analyzing the defense statements prepared by the students as part of the post-test, the results showed that the students’ practical skills in writing legal documents increased from 5-10 percent to 50-60 percent.

Shabir Atasheen, The Asia Foundation’s legal writing course consultant, said, “In one semester, the students’ practical legal skills increased to a level they wouldn’t have been able to gain even after five years of experience working as defense lawyer.” Saqib agreed, stating that even given his experience as a defense lawyer, he “felt that after merely teaching the class as a professor, my understanding of legal writing and his ability to think critically using systems had greatly improved.” The goal is for the classes to ultimately become a part of the permanent curriculum at the universities.

Given the inventiveness of the course and curriculum, students are in many cases thinking outside of their comfort zones in positive ways—and in more ways than just academically. An additional benefit to the classes is that, given the mixing of males and females at law and Shari’a law faculties, the students are learning to work together in a mixed environment.

Once these students graduate, they will be in a better position to work as lawyers of any kind, with organizations or with the government. Importantly, they will be familiar with what they are supposed to do in practice, rather than in theory. This familiarity, bolstered by the practical legal education provided by the legal writing courses, will allow the students to approach their work in a practical, problem-solving way that will not only benefit their clients, but positively contribute to the development of rule of law in Afghanistan.