ASEAN Could Take Lead on Plastic Crisis in Asia

April 22 marks Earth Day around the globe. I was in 8th grade when Earth Day was first commemorated in 1970, and to mark the day, I participated in annual trash clean-up events at my school. At that time, my world was pretty much the town where I grew up in New Jersey and I didn’t think very much about the rest of the world, I just wanted my neighborhood to be clean. But eight years later, my world expanded when I went to live and work in Bangkok. I vividly remember being struck by the amount of plastic bags, bottles, and wrapping on the streets and in the city’s once-many canals. Now, after four decades of traveling in Southeast Asia, I have witnessed the plague of the plastic bag across pretty much every major city in the region. 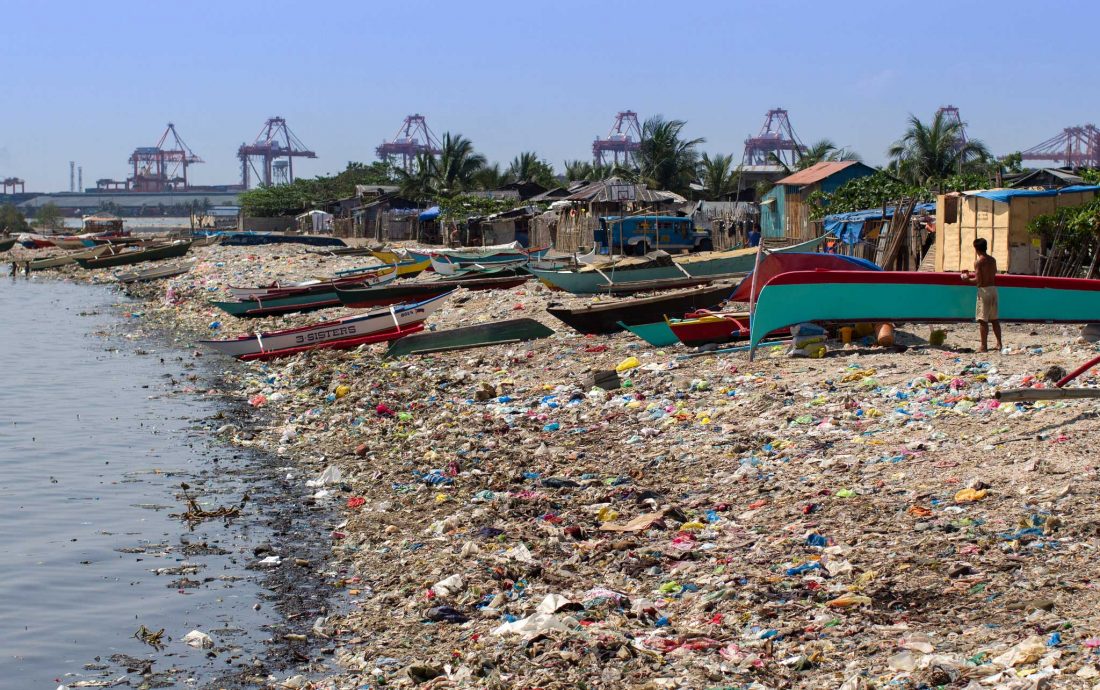 A polluted Manila Bay. It is estimated that some plastic products take more than 400 years to decompose, especially in deep waters. Photo/Flickr user Adam Cohn

If anything, the situation has become more ubiquitous. Asia’s waters are choking on mountains of plastic and microplastic debris, in a crisis of increasing concern because of their adverse effects on marine life and potentially humans. The world’s top six plastic polluting countries are: China, Indonesia, the Philippines, Vietnam, Sri Lanka, and Thailand. While all of these countries have experienced significant increases in their GDP, reduced poverty, and an overall improved quality of life, with rapid economic expansion comes an increased demand for consumer products that has yet to be met with commensurate waste-management infrastructure.

Plastics can enter the marine environment through a variety of ways, including ineffective or improper waste management, intentional or accidental dumping, and littering of shorelines or at sea. Large pieces of plastic that are eventually fragmented by the sun and weather into pieces smaller than five millimeters in size are defined as “microplastics.” These microplastics are now present at virtually every level of the ocean’s ecosystem. According to a recent study authored by researchers at Plymouth University, plastics in waters are threatening 700 different marine species and causing rising rates in species extinction worldwide. Moreover, microplastics are ingested in large amounts by marine organisms, especially those that comprise the international seafood industry. Consequently, people’s health is also at risk when they eat seafood that has been contaminated by toxin-saturated microplastics. In another study, a quarter of the marine fish sampled from markets in Indonesia and California were found to have plastic debris and fibers from textiles in their guts.

It is estimated that some plastic products take more than 400 years to decompose, especially in deep waters. If this problem is left unaddressed, by 2025 the ocean could contain one ton of plastic for every three tons of finfish—a frightening statistic. Plastic waste is very much a global problem, but as the Journal of Science reports, placing greater attention and pressure on the top contributors could reduce plastic waste leakage by 45 percent.

At a time when many question the unity and effectiveness of the Association of Southeast Asian Nations (ASEAN), combatting marine pollution could present the grouping with a new opportunity and focus. By prioritizing stronger waste management and public awareness campaigns and practices, ASEAN is well placed to take the lead in addressing a critical global problem while fostering regional cooperation and strengthening the ASEAN community.

On April 26, Manila will host the 30th ASEAN Summit. ASEAN leaders would be wise to discuss in earnest how to reduce the impact and sources of marine debris, particularly plastics and microplastics, within the region as well as globally. Through other Asian regional architecture such as the East Asia Summit (EAS) and the Asia-Pacific Economic Cooperation (APEC) Forum, ASEAN could also involve China, which is accountable for 28 percent of the plastic in ocean waters, and the United States, the world’s 20th largest polluter of plastics. Including nations such as Japan, South Korea, and India in discussions will help strengthen Asian regional architecture like the EAS and the ASEAN Regional Forum (ARF). Given that ASEAN serves as the core of this regional architecture, this continued dialogue will also help ensure ASEAN centrality. While this is what ASEAN wants, it needs to act in unison on how to attain and sustain such centrality.

But the best laws, rules, and regulations amount to little if there are no national regulations that contain policies and concrete measures to prevent plastics pollution. Strict regulations on plastic bags and waste management in coastal areas, where 65 percent of Southeast Asians live, is imperative. ASEAN governments and civil society organizations need to work together to address and mitigate unmanaged plastic waste entering its waters. Failure to act at a level of strategic interconnectedness required to meet the scope of this challenge will only cause greater economic and environmental damage. As ASEAN commemorates the 50th anniversary of its founding this year, ASEAN is presented with the opportunity to show the world it can effectively work together to address the plastic pollution problem that originates from its waters.