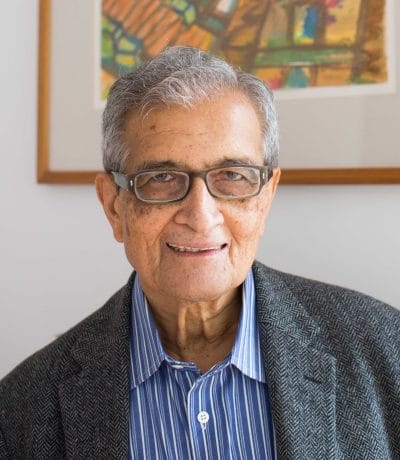 On October 12, The Asia Foundation’s Lotus Circle will honor Indian Nobel Prize-winning economist and philosopher, Amartya Sen, at the Lotus Circle Leadership Awards Gala in New York for his groundbreaking contributions to advancing the central role of women’s experience and choice in his pioneering work on inequality. He has said when looking at development economics that “one must be interested in inequality, as the issue of inequality and that of poverty are not separable.” In Asia editor Alma Freeman spoke with Sen ahead of the event.

The path to increasing women’s voice and agency is through their independence and their empowerment. Your philosophy prioritizes the capability of people—and ensuring that they have the opportunity to succeed. Can you talk about what this means and where you think Asia stands on this path today?

The capability of people is essential, not only for ensuring the quality of life of the people themselves, but also for the efficient functioning of human agency in economic production, political activities, and social transformation. What can be called the “Asian insight” in initiating development and extending its reach involves an early focus on the advancement of human capability through initiatives in education, health care, and social support. In the economic development of Japan in the early Meiji period, educational expansion played a radically transforming role, followed by other means of capability enhancement, including improving public health and strengthening the social safety net.

That understanding can also be seen in the development of a number of East Asian economies in the 20th century, including South Korea, Taiwan, Hong Kong, and Singapore, as well as China. The lesson has now spread beyond East Asia, and there has been a radical transformation of the Thai economy and society through good school education and universal health coverage, particularly through the “30 Baht Scheme.” South Asia, including India, where I was born, can greatly benefit from this Asian insight, and in parts of India (particularly in Kerala, and to some extent, in Tamil Nadu and Himachal Pradesh) this can already be seen. But the bulk of South Asia and much of India could still benefit greatly from the understandings reflected in the Asian insight.

To borrow from another of your points of wisdom, if we want better capability, then we need better capacity. Where girls’ and women across Asia still face enormous barriers to the essentials to build their capacity—education, healthcare, a voice—what role and responsibilities do governments and institutions have to play?

Women’s voice and agency are essential for development. This understanding has emerged again and again across the world. The neglect of facilities to help develop women’s capacity has been a central cause of the lack of progress in many parts of the world. These deficiencies have to be removed not only for the wellbeing of women themselves but also for the importance of women’s agency in changing society and the lives of everyone—male, female, and children.

Governments obviously have a central role to play for this change to happen, just as governments have played a key role in the progress seen in Japan, China, Korea, and elsewhere. But on top of that, push from women’s organizations like The Lotus Circle and activism is instrumental in making the government do its job. A clear-headed understanding of the deprivation of women and the potentiality of change in women’s lives has to be an essential feature of developmental transformation.

When you were a young child in Dhaka, you had a tragic experience with a wounded man that you’ve since shared has had an enormous influence on your work today, and your early realization of the penalty of “economic unfreedom.” Can you share with our readers that experience and how it shaped you?

What you describe was indeed a devastating experience in my childhood of which I have quite a harrowing memory. I was playing in our garden when a wounded man who was bleeding profusely came through our main gate with stab wounds on his body. He wanted water and help and I gave him water to drink and while he was resting his head on my lap, I shouted for my father. Luckily, he was there and took the wounded man to the hospital immediately, but sadly, not in time to save his life. The man, whose name was Kader Mia, said that he had been stabbed by some thugs because of his being identifiably Muslim in what was, at that time, a largely Hindu area of Dhaka. He told us on the way to the hospital that his wife had tried to prevent him from going to a possibly hostile area in those days of communal rioting, but Kader had to go since they had no income and there was a prospect of a job as a day laborer in Wari where we lived. His children were hungry and starving and he felt compelled to look for work despite the dangers involved.

I was shocked by the fact that someone could be killed by other human beings without knowing anything about him, other than his religion and community. My fear of identity politics and even of communitarian thinking has been strong ever since (even though I see the good things that a communitarian identity might do in some other respects). Another striking thought that went on turning in my mind is that the lack of economic freedom (in particular Kader’s need to go out despite the dangers to earn a little income to feed his family) can rob a person of all freedom in circumstances like this, when Kader lost his life in trying to earn a little money for food for his children. Freedom of different kinds are closely interrelated.