On a hot, sunny afternoon, a group of young development professionals follows Iromi Perera around the city of Colombo on an educational tour. Their focus is urban governance rather than tourism, and the sightseeing highlights modernity and change. Cranes and high-rise scaffolding encroach on informal settlements and small housing areas for the urban poor, who, she explains, are being rapidly displaced.

Sri Lanka is the location of the 2018 Asia Foundation Development Fellows Workshop on Asian Development, which offers participants an in-depth look at development issues and country contexts from the perspective of practitioners such as Iromi, herself a former fellow, who was appointed to guide this year’s cohort.

Pausing at a construction site that was once a massive housing complex, she addresses the new fellows. “As we develop rapidly toward this ‘world-class city,’ I want this to be a reminder of the price we paid for it.” 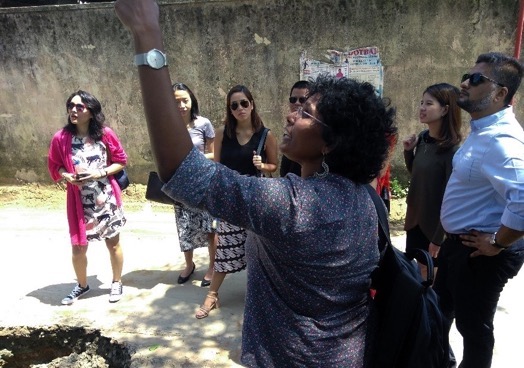 Iromi Perera leads the current cohort of development fellows on an urban governance tour of Colombo during the 2018 Workshop on Asian Development in Sri Lanka.

Young leaders can influence the trajectory of inclusive growth

Iromi is representative of the many dynamic and reform-minded young people who are rising to meet the policy challenges left by Sri Lanka’s 30-year civil war—in this case, fighting for inclusiveness in the midst of rapid growth and persistent social division. Her work, and her unique skill set, led to her selection as one of twelve Asia Foundation Development Fellows in 2017. The Development Fellows Program identifies and equips emerging leaders across Asia as agents of reform on critical development issues such as rapid urbanization.

Intrigued and disturbed by the persistent social disparities she observed, Iromi became a researcher for the Colombo-based think tank Centre for Policy Alternatives (CPA), one of Sri Lanka’s premier resources on public policy and democratic governance. She soon found her calling working with Colombo’s often overlooked and misunderstood communities of urban poor, fighting large-scale evictions through research and advocacy. Urban evictions, she argues, are more than just a community issue; they are a key element of Sri Lanka’s transitional justice agenda, inextricably linked to postwar governance.

After nine years at CPA, Iromi decided to independently pursue her research and activism in Colombo full time.

“The work involves documenting communities, supporting them on specific issues and writing about those issues, getting media attention…and then working with authorities and ministers to change things at a policy level. Documenting is particularly important to ensure that their history and realities are not erased by the state mechanisms that broadly categorize all affected communities as ‘unauthorized’ and ‘slum and shanty dwellers,’ when in reality that is not the case.” 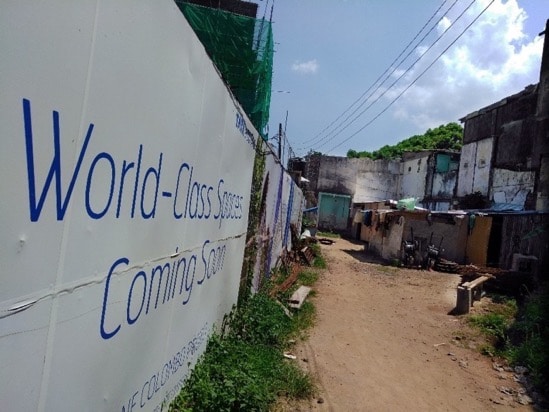 A construction site in Colombo promises “World-Class Spaces Coming Soon,” but what will become of those who are displaced?

The work entails hours navigating the many facets of the Sri Lankan government, cultivating relationships with agency staff through repeated phone calls and visits. When she’s lucky, her hard work may yield a short meeting with a top-level government minister or decision-maker to make her case for the displaced.

Her journey has not been without adversity. During her fellowship year, Iromi had to grapple with the sudden death of her close friend and mentor, Vijay Nagaraj, an activist and researcher with whom she first began documenting the evictions in Colombo. She has struggled to divide her time between responding to the countless community emergencies and the longer-term project of scaling up her research and advocacy for greater policy impact. And while recognition of her work has led to several lucrative job offers from reputable organizations, she remains wary that accepting them might interfere with her advocacy.

These are typical of the real-world questions faced by social-impact leaders today. In part, the Development Fellows Program helps fellows understand and manage the complexities that come with effective leadership.

“I actually was skeptical about leadership trainings. But this program has helped me a lot,” says Iromi. “When we are working, there is very little time to think about our own capacity building, about building teams and successors, or even about how we narrate our stories effectively. Some of the program sessions we’ve had have been real eye-openers for me.”

At this juncture, she has resisted the big job offers and continues to devote herself to advocacy. She says activists and researchers like herself have a duty to the community to see the issues through as far as possible.

“It is actually easy for me to go in, document and write about the affected communities, see my name in bylines, and speak at conferences abroad, but as long as the people still continue to face injustice, I have a responsibility to honor the trust they placed in me to share their experiences and stories, and that is why I’m so passionate about the advocacy part of the work.”