The national elections of 2018, preceded by controversy and enveloped in political heat, were conducted in the true spirit of democracy that Pakistan so deserves. Observers and analysts will have their say, but I want to share my experience of three inspiring aspects of Elections 2018.

First, after working with my colleagues to educate first-time voters, including women, minorities, and people with disabilities, I am awed by the passion and patriotism of even the most vulnerable and marginalized in our society. Despite the structural barriers that many still face, Pakistani citizens have a deep desire to be part of the political process and help their nation move forward. In one district of Balochistan where we conducted voter-education workshops, an entire village became first-time voters. In our own office, a member of a minority group proudly prepared to vote for the very first time. He felt empowered enough to believe that his vote also counts. 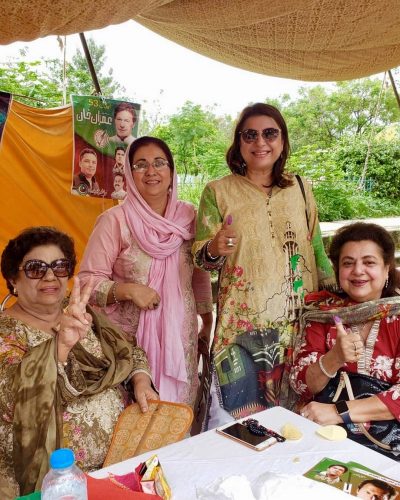 The author and her family on election day.

Second, the polling was gratifyingly well organized and efficient. Despite the heat and humidity, party workers and polling staff worked hard to give voters a safe and user-friendly experience. From the party stalls verifying voter lists outside the polling stations, the courteous and professional security personnel, and the efficient cross-checking of eligibility by representatives of the political parties inside, to the issuing of ballots, the explanation of the procedure, the marking of votes in private booths, and, finally, the triumphal ink mark on the thumb, I saw how Pakistan can get it right when it wants to.  There was heartbreaking violence in Quetta, but polling continued amid strong demand from voters, signaling that democracy can overcome the divisions and atrocities that still plague large parts of our country.

Finally, how honored I was to participate in this rite of democracy alongside committed women.  Accompanying my mother to her polling place, I watched with pride as she completed her ballot and emerged with her marked thumb raised, doubtlessly having cast a vote, as she so often has, the opposite of my father’s!  We then proceeded to my own polling place, in another part of the city, where my octogenarian mother-in-law and several fellow party members were serving as poll workers.  It was a privilege to vote in the company of these two powerful women, who have always inspired me, and the many other women, from all walks of life, who voted in these elections.  I saw today, once again, that democracy empowers women to make their voices heard. Political parties—no matter which—and the political process more broadly allow women and men to participate together in our nation’s development, and with time our differences will narrow.  It was sad that many women in remote districts were prevented from voting, but if we continue to do so, they will, too, one day.

With the polls now closed and the early results emerging, this is clear:  Whatever controversy follows, whoever wins, whoever forms the next government, Pakistanis are together, and together is how we will move Pakistan in the direction of unity amid diversity, prosperity in challenging economic times, and stability in a volatile global political environment. So, although they have political views that differ from mine, it really does not matter to my mother or my mother-in-law whom I voted for. We all voted for Pakistan.