On a hot Wednesday afternoon on the outskirts of Dili, a group of teenagers and young adults gather around a radio. Sitting quietly together, they listen—some earnestly taking notes, some eyeing the snack table, others gazing into the distance. They are tuned to Radio Liberdade’s Teki Toke, a weekly broadcast that takes aim at Timor-Leste’s devastatingly high rates of intimate partner violence.

Broadcast across Timor-Leste through a network of community radio stations, Teki Toke targets 15- to 25-year-olds. Today’s episode is focused on relationships and infidelity, with a studio guest responding live to audience questions. The group of young listeners is one of 12 that meet every week around the country, each with a facilitator to guide and document the lively post-show discussions about gender roles and power relations. 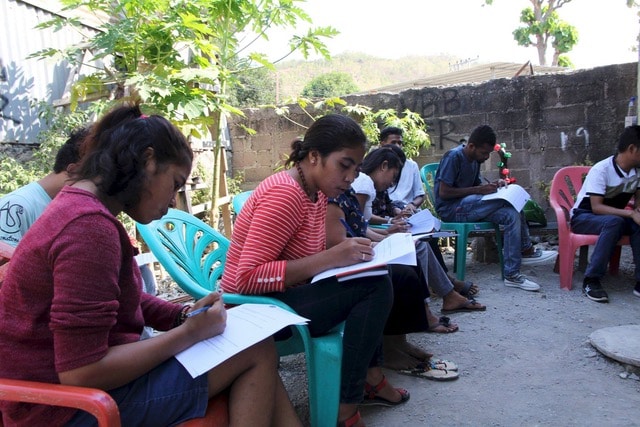 Support for the radio project comes from The Asia Foundation’s Nabilan program, an eight-year partnership between the governments of Timor-Leste and Australia to end violence against women. The radio project also receives support from the German Society for International Cooperation (GIZ).

Teki Toke approaches its difficult subject holistically, says Radio Liberdade journalist Felicia Maia. Nabilan research shows that 59 percent of ever-partnered women in Timor-Leste aged 15 to 49 have suffered physical or sexual violence at the hands of an intimate partner. But instead of talking directly about violence against women, says Maia, “we focus on the problems and experiences that can lead to violence. We try to give young people the tools to recognize unhealthy situations and find a better way.”

The show addresses beliefs and situations that can lead to violence: lack of socioeconomic opportunities, boredom, entitlement, stereotyping, and broad acceptance of violence as a form of dispute resolution and punishment.

“Our shows about love are very popular. Young people are really interested in learning how to resolve relationship situations,” says Felicia Maia. With Timor’s high youth unemployment, she adds, programs about jobs and training are also popular. 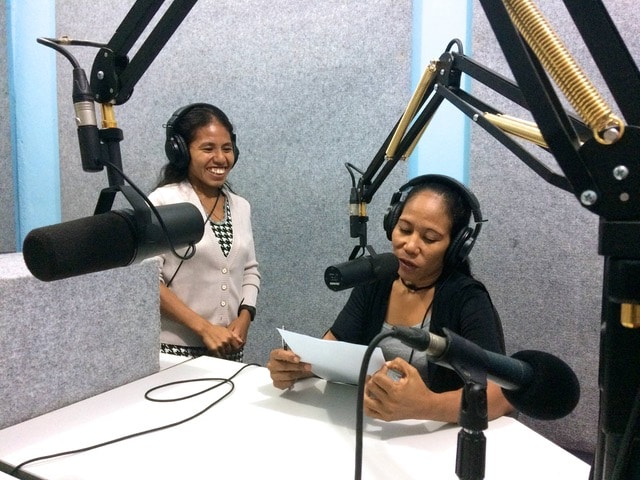 Data from the weekly listening groups is promising.

Young people who listen and participate in the discussions consistently show less tolerance for violence as a response to disobedience, infidelity, or uncompleted housework.

For example, about half of participants in the latest round of listening groups, both male and female, initially said that violence was justified if wives did not obey their husbands. After eight weeks of listening and discussion, just 7 percent of females and 14 percent of males held this view.

The show seems to provide an opportunity for viewing the role of women in a more nuanced light. Before listening to the show, 57 percent of both males and females said the most important role of women was to cook and care for the family. After eight weeks of listening, 17 percent of females and 13 percent of males held this view.

For the producers of Teki Toke, nearly all in their 20s themselves, the 12 radio listening groups represent more than just an opportunity to gather data. “They are our measurement. Are we doing a good job? Are we engaging them? Does it catch their attention?” asks Felicia Maia. “We need to go to communities and ask them directly: What are you talking about? What’s important to you and your family and your community? It can’t just come from us.”

But long-term social impacts are somewhat harder to assess.

“I think with Teki Toke we might not always change people’s behaviors straightaway,” says Felicia Maia, “but we can give knowledge and understanding, which is the first step to changing people’s minds.”

Nabilan program officer Rosa Cardoso also believes that the show provides a counterpoint to pervasive messages in the media. “In Timor-Leste, we see lots of coverage about violence against women that is problematic. It is sensationalized and usually blames the victim; for example, describing her clothes or the fact that she was out late at night. Instead, we want to send empowering messages, messages that help to change people’s minds. We want to encourage reflection and imagination and thinking.” 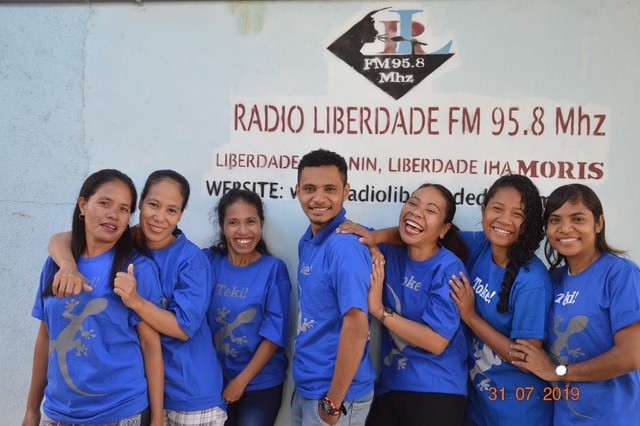 In addition to Teki Toke, the Nabilan program is trying its hand at radio drama.

During last November’s 16 Days of Activism Against Gender-Based Violence, Nabilan premiered the first two episodes of the radio play KOKOSA!, which follows the lives of four characters—Anita, Antonio, Milena, and Jose—as they deal with the stresses of life, relationships, and domestic violence.

KOKOSA! is an adaptation of SASA!, a community-based approach to preventing violence against women and the spread of AIDS, developed by Raising Voices Uganda. “I think these [radio plays] are effective because they tell a story that sounds similar to many people’s lived experiences,” says the Asia Foundation’sLizzie Adams. “Having characters that people connect with helps keep listeners engaged on a sensitive topic, and hopefully will encourage them to talk about the issues with their friends and families,” she says.

Rosa Cardoso, also an actor on the show, says radio plays are relatively uncommon in Timor-Leste. “It was a new experience,” she said. “We tried, through this story, to show how to respond to situations such as cheating or violence or controlling behaviors, so that when these things happen, young people are prepared to identify them and deal with them.”

Episodes of Teki Toke and KOKOSA! are available online, in Tetum.