Timor-Leste Elections 2017: More of the Same?

Politics in Timor-Leste is always engaging and colorful, and the lead-up to the 2017 presidential election on March 20 is no exception. With campaigning in full swing, the Timorese variety of consensus politics is on full display. It is a common site these days to see campaign event-bound trucks loaded with supporters of two former opposition parties—FRETILIN and CNRT—jointly waving the flags of both parties, while dressed in identical t-shirts supporting a single candidate for president. 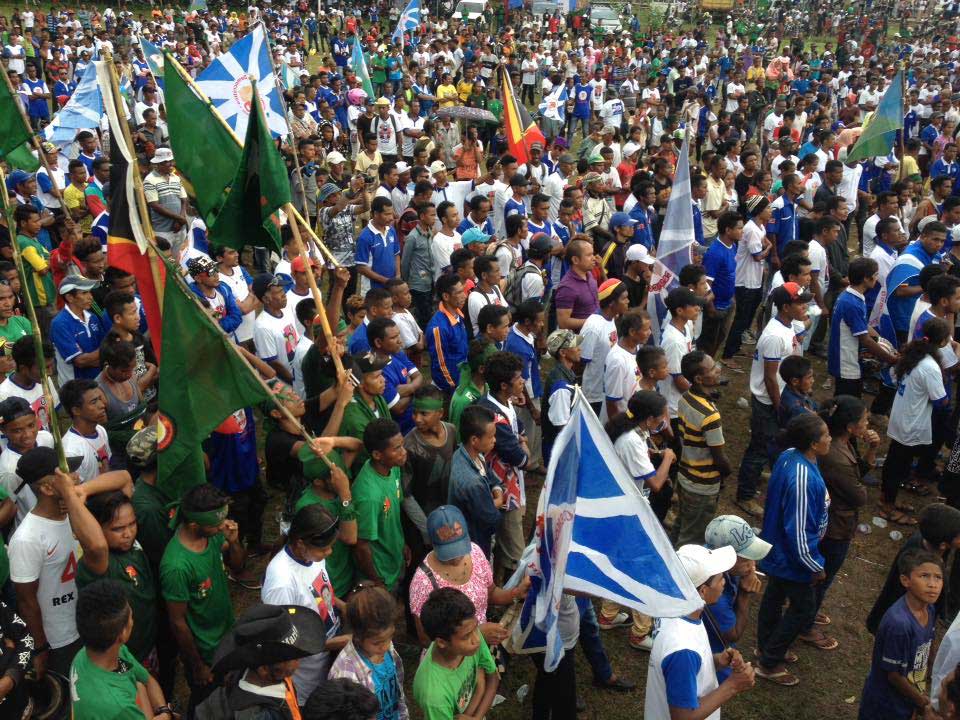 Perhaps less of a surprise is that the anointed candidate for president is FRETILIN resistance icon, Francisco Guterres (known as Lú-Olo), since local lore here is that it is now “his turn” (a reference to the fact that most of the other iconic resistance leaders including Xanana Gusmão, Mari Alkatiri, Jose Ramos Horta, and Taur Matan Ruak have all either had a stint as president, prime minister, or both). While consensus politics thrives, individual freedom of expression, however, remains threatened.

Since the dawn of independence, the two guiding forces in voting trends have been Xanana Gusmão and the political parties. The sheer power of Xanana’s influence was seen in his support of Taur Matan Ruak in 2012, and is no less pronounced in 2017 with his support of Lú-Olo for president. The influence of political parties is also evident in the recent arrest of a prospective voter in the municipality of Oecusse for the simple act of carrying a FRETILIN flag to the campaign event for presidential contender Antonio de Conceicao of the Democratic Party (PD). His arrest was swiftly followed by a joint FRETILIN/CNRT press conference reminding voters that Lú-Olo is the parties’ choice for president, and forbiding individuals from carrying party flags to any other events. The resonating message to voters that they should not mistake the right to vote for an individual opportunity to participate in democracy, but rather as an obligation to toe the parties’ line.

Early indications are that the parliamentary election and subsequent selection of a prime minister, the ultimate prize, is bound to follow suit. Yet, early hopes were that things might be different this year. The emergence early last year of the new Popular Liberation Party (PLP), espousing democratic principles of “issue-based politics” and “accountability” positioned itself as an opposition to the reigning consensus politics. Yet, even this new approach required the endorsement of a resistance leader to be taken seriously, which in this case, came from current president Taur Matan Ruak. However, the PLP has been unable to make the inroads it aspired to, currently polling at only 4 percent of likely voters in the upcoming parliamentary elections.

So, what will it take for Timor-Leste’s politics to shift course? As elsewhere in the world, the notion of intergenerational shift is not a simple one. In Timor-Leste, it is burdened by a commitment by the resistance leaders who feel compelled to relentlessly serve the nation, combined with an unclear understanding of who represents the young generation—and whether simply representing the youth is enough. The elders seem to highlight the need for the younger generation to prove themselves, while falling short of mentoring them into leadership—sometimes even openly questioning the wisdom of inter-generational transition as recently captured on social media when Mari Alkatiri publicly questioned the notion as “incorrect,” “opportunistic,” and “naïve” in the absence of political legitimacy.

If the 2017 elections could mark a political shift and gradually start to afford political legitimacy to the next generation, the change couldn’t come sooner. The most recent Tatoli! public opinion poll conducted by The Asia Foundation in December 2016, shows an overall downward trend in the outlook of the country, with increasing levels of discontent among younger voters. In 2014, 73 percent of respondents said the country was going in the right direction, while in 2016, 58 percent of respondents indicated the same. For respondents under the age of 25, 80 percent in 2014 identified the country to be moving in the right direction, compared with only 50 percent in 2016.

While the poll shows that there is clearly a great interest in politics (nearly 98% of respondents indicated that they will also vote in the 2017 parliamentary election), and recent years have seen far greater access to political and other information via televised debates and social media, the actual understanding of the issues and programs of parties and candidates and the roles these play on voter behavior, remain limited.

The poll suggests that the electorate does believe that issues are important, with 54 percent of respondents claiming they voted for a party in the 2012 elections based on issues, and not the candidate who represented it. However, this is contradicted when respondents were asked what they held as the most important attribute of a political party: its programs/issues or the party’s role in the independence movement. Respondents overwhelmingly (50%) cited the role of the party in the independence movement as the most important attribute, compared to only 22 percent claiming programs and issues as the driving factors for their vote for a party.

Most analysts and Timor watchers concur that the outcome of the presidential election is all but a foregone conclusion—and that the parliamentary election itself holds little chance of any major surprise. Worthwhile to watch out for, though, is whether the discontent among young voters continues to grow, and whether there will be some sort of a tipping point for politics in Timor-Leste. Recent incidences of violence between the ruling consensus and smaller parties do indicate that not all are equally enamored by the consensus. Whether the outcome is a surprise or not, the politics surrounding it will promise to be engaging in true Timor style.