By James Owen and Heesu Chung 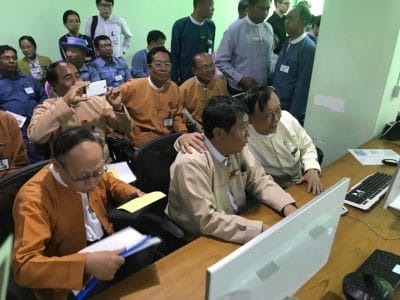 “We don’t have to employ more traffic police; the smart machine will do the job!” proclaimed U Ye Myat Thu of the Mandalay City Development Committee (MCDC) to an audience of three dozen ministers, mayors, and officials from across Myanmar crammed into a small traffic control room in Mandalay. Myanmar’s second-largest municipality has installed remote-control traffic lights, high definition video cameras, road sensors, and loudspeakers at intersections throughout the city, he explained. Software in the control room takes that data and generates dynamic traffic-flow visualizations for a handful of trained officials overseeing the system.

The new technology, the Sydney Coordinated Adaptive Traffic System (SCATS), uses artificial intelligence (AI) to optimize traffic flows across the city. Learning and improving over time, it can answer questions such as, “To maximize traffic flows, how long should the green light stay on during rush hour?” The system runs daily experiments and makes continual, small adjustments without the need for a human operator. SCATS has already increased traffic flows over one of Mandalay’s main bridges by a reported 50 percent.

The Mandalay traffic control demonstration was part of Myanmar’s third national Horizontal Learning Workshop, a project of The Asia Foundation and the Renaissance Institute. It was a clear example of what Harvard’s Matt Andrews terms “positive deviance” in public sector reforms. It’s a somewhat unwieldy expression for a sharp insight, that in many contexts there are groups or organizations whose uncommon strategies enable them to find better solutions to their problems than their peers. Forget international best practice: there is much to learn from these local examples of success.

The control room is an outlier among Myanmar’s municipalities, an experiment made possible by the relative autonomy of municipalities in Myanmar’s otherwise highly centralized system. Such outliers contain valuable information about where reforms can lead and possible paths to get there. The three-day workshop was an opportunity for mayors, ministers, and municipal bureaucrats from across the country to showcase local reforms and learn from each other’s successes, missteps, and failures. The traffic control demonstrations provided a graphic example of the power of data and how experimental approaches can advance reforms when no simple solutions are apparent.

A consistent workshop thread was how technology can sidestep some of the stubbornly persistent human-resource problems that have bedeviled local administration in Myanmar. For instance, municipalities are limited in whom they can hire and how much they can pay, due to restrictions imposed by the Union government at a time when Myanmar’s cities were simpler places to manage. Deficiencies in the educational system mean that analytical skills are also in short supply. MCDC has turned to SCATS to sidestep these hurdles, obviating the need to train a cadre of traffic control analysts and hire traffic police to stand at intersections operating the traffic lights.

The SCATS software is sold globally—a rare success of an imported development tool—but it takes on a distinctly Myanmar flavor when combined with one of the most widely used technologies in the country, Facebook. This is a country where mobile-phone ownership has skyrocketed since 2014 to more than 105 phones per 100 people, and where 80 percent of those phones are smart phones, compared to just 59 percent in neighboring Thailand. For many here, Facebook is the internet. 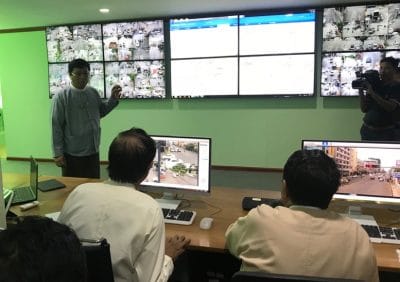 Back in the traffic control room, SCATS is automatically tracking traffic violations and saving the videos for later review. When SCATS recently recorded a hit-and-run accident, MCDC posted details from the video on its Facebook page. The perpetrator turned himself in within days. MCDC has essentially sidestepped the stubborn problem of weak traffic enforcement by crowd-sourcing detection and introducing social sanctioning as a form of deterrence. (It’s an innovation that many in the West, where privacy is a greater concern, might find uncomfortable.)

MCDC’s use of Facebook reflects a broader trend among Myanmar’s municipal governments. Facebook has become a place where citizens can virtually assemble to articulate their needs, and municipal officials throughout the country have begun to scan the comments on their Facebook pages to inform their decisions. The Asia Foundation, in partnership with Koe Koe Tech, a technology-focused local nonprofit, is looking to systematize this data collection by using Facebook chatbots and a new mobile application, MyoTaw, that allows the public to directly communicate their concerns to municipal authorities. The app will also let users pay their municipal taxes and fees, freeing tax collectors to focus on higher-value tasks, such as adding the many missing properties to the tax register—essential for increasing the tax revenues that fund urban services.

This kind of technological leapfrogging isn’t always glamorous. “Of the first six months of every fiscal year, we used to spend about three months filling in tax bills by hand,” reflected U Aye Koh, senior bureaucrat of the Taunggyi Development Affairs Organization, speaking to workshop participants. This changed with the adoption of Myankhon (Fast Tax), a computer- and tablet-based mobile application for tax collectors and their supervisors that frees executive officers like U Aye Koh from personally signing over 2,700 business licenses each year. The app has streamlined tax collection, and The Asia Foundation and the Renaissance Institute are supporting the government’s use of the digital data for policymaking. A case in point: how to increase property tax revenues while making the convoluted system fairer and easier to understand.

Despite its effectiveness in sidestepping some stubborn obstacles to development, technology is no panacea. Some people may be left behind as governments shift their public engagement to digital platforms. The Foundation will be testing this hypothesis in five Myanmar cities in its upcoming City Life Survey, a multiyear perception survey of 2,400 urban residents. The survey data will reveal how different groups, such as the rich and the poor, make use of technologies related to municipal government—for instance, how often they post comments on their municipality’s Facebook page.

The new technology must also plug itself into a very human system. U Aye Koh spoke to participants about struggling to make his staff comfortable with the new tools. The tax collectors were wary of Myankhon’s digital oversight, and they were uncertain of how it might change their roles. Two years in, however, they have been won over. With the time savings that Myankhon provides, they can now focus on the huge task of keeping their property records up-to-date in these dynamic cities.

Which takes us back to Mandalay’s traffic police. Introducing AI to traffic control doesn’t mean that traffic police are no longer needed; rather, it frees them for priority tasks more suited to people. And ultimately, technology, like any development intervention, is constrained by the system it inhabits. As Myanmar’s urban citizens know all too well, even the most sophisticated AI controlled traffic light is useless when the electricity goes out.

James Owen is an economist for The Asia Foundation in Myanmar, and Heesu Chung is a master’s student at the Fletcher School of Law and Diplomacy. They can be reached at [email protected]. The views and opinions expressed here are those of the authors, not those of The Asia Foundation.