The Saga of Rice Sector Reform in the Philippines

In 2011, The Asia Foundation published Built on Dreams, Grounded in Reality: Economic Policy Reform in the Philippines, a collection of case studies that document policy and institutional reform in various sectors in the Philippines. The book included Chapter 7 – Stymied Reforms in Rice Marketing in the Philippines, 1980-2009. The chapter told how numerous successive efforts to change rice industry policy, attempted over more than three decades, were stymied by the continuing influence of status quo beneficiaries.

This monograph updates the rice sector reform story. On 5 March 2019, Republic Act 11203, commonly referred to as the “Rice Tariffication Law” deregulated rice trade in the country by eliminating the National Food Authority’s import monopoly powers and replacing quantitative restrictions on rice imports with tariffs. The Saga of Rice Sector Reform in the Philippines reviews the most important features of rice policy and its impact in the Philippines prior to 2019 and tells the story of how the entire economic decision-making cluster of the Philippine cabinet, backed by a popular President and a collaborative legislature, finally enabled rice sector deregulation and import tariffication. 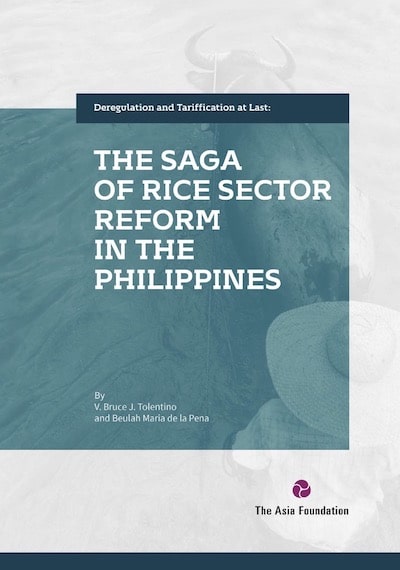